Google and Samsung are teaming up for the Samsung Mobile Unpacked 2011 “Google Episode” event on October 11, time for the Nexus Prime announcement we would say.

Apple will be holding its iPhone 5 / iOS 5 etc event October 4, once this is all done and dusted Google and Samsung will fight back with its event October 11, Nexus Prime to Droid Prime equals fun time.

The Samsung Mobile Unpacked “Google Episode” event in San Diego California is still a mystery, there is not a lot of information of what will be announced but we are guessing the Droid Prime or the Nexus Prime, or possibly both devices.

The new Google Android Ice Cream Sandwich operating system will also be talked about as well, we will bring you up to date as son as we here more. Stay with us because this is going to be very hot indeed, edge of the seat stuff.

The Nexus Prime or Droid Prime needs to be good to compete against the likes of the Apple iPhone 5. Just to remind you all, the Nexus Prime has had its Bluetooth certification, and we all know this is one of the lasts steps before the smartphone is released.

Get ready for October 11, this is going to be a fun packed day, where we will reveal all. 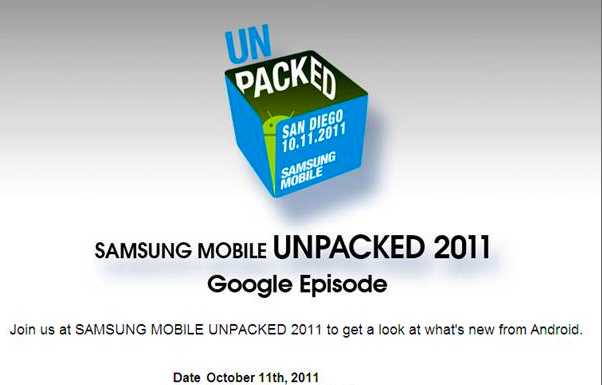