Android 4.0 ICS updates taking too long but why?

Here at Phones Review we’ve been attempting to keep readers informed about the Android 4.0 Ice Cream Sandwich (ICS) update. There was a lot of excitement about the latest Android mobile OS when it was launched around 8 months ago but news today is that the rollout is happening far too slowly and we’d like to know why.

We’ve published many articles now about expected timeframes for the ICS updates on various devices and carriers. We recently told how the Motorola Xoom on Verizon is about to start receiving the ICS update (June 4) and we also told how T-Mobile has announced the ICS update for the Galaxy S2 for June 11. However we were staggered to hear the recent statistics that only 7.1% of Android devices are actually using 4.0 ICS, despite the fact that it has now been available for many months.

This news comes from The Verge and the information is gathered from statistics of Google Play downloads (from Google, Android Developers) so while this is not likely to be completely accurate it should give a fairly good representation of the numbers involved. Although devices on ICS have doubled in numbers since early April this still sounds pretty dismal to us and the earlier OS, 2.3 Gingerbread actually slightly gained its share in the previous two months even though you’d expect this to be falling now.

Android 2.3 Gingerbread actually still accounts for 65% of Android device operating systems, while even 2.2 Froyo still accounts for 19.1%. It seems a real shame to us that Google, the manufacturers and various carriers involved can’t get on top of this fragmentation, especially as the platform is way out on top in its US smartphone marketshare. We know that plenty of our readers have become increasingly frustrated at the delays in the ICS rollouts and will also be wondering about the wait.

Interestingly Mashable has come up with a video about this woeful display where they examine why the ICS rollout is taking so long. You can see the video below this story so you might like to check it out. We’d like to ask what you think about the long wait for ICS for some devices. Are you still waiting for your device to receive the Ice Cream Sandwich update? What do you think could be done to speed things up for future updates? Why not let us know by sending us your comments. 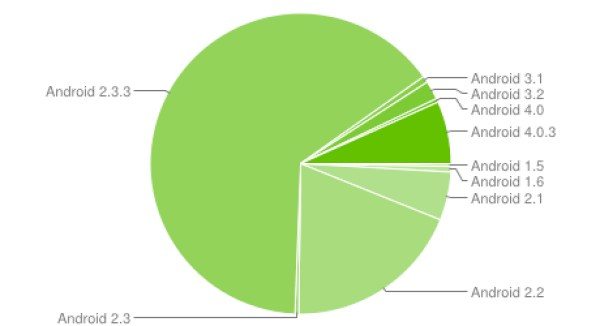 5 thoughts on “Android 4.0 ICS updates taking too long but why?”