We’ve been bringing you plenty of news about the newly announced Microsoft Surface Windows 8 Pro and Windows RT tablets. These were unveiled in a blaze of publicity at a special Microsoft event and are attracting a lot of interest. Almost inevitably the reveal of the two Surface tablets has led us to wonder about the Microsoft Surface vs. the iPad in the tablet race.

So far we’ve shown you a video of the Surface RT, a look at the clever Touch Cover and Type Cover that also act as keyboards for the Microsoft tablets and some of the first available specs. Whenever a new tablet is announced though it begs the question of whether it might be a genuine iPad rival and that’s what we’re wondering today. We have some specs and details of the Surface tablets, although full details are not yet available such as processor speed, memory and battery life. However going on what we know so far we’ll compare details of Apple’s New iPad (iPad 3), the Surface for Windows 8 Pro and the Surface for Windows RT.

The two Surface tablets are both bigger and heavier than the iPad which might go against them but the Windows 8 Pro version has a larger built-in storage option, up to 128GB, and as mentioned previously whereas the iPad has a neat Smart Cover or Smart Case accessory the Microsoft Touch Cover or Touch Case also feature keyboards for the Surface. Over at Laptop Magazine a handy chart shows the specs so far known of the Surface tablets compared to the current iPad (third generation).

Based on what we know so far then, do you think the tablet race is now on between Apple and Microsoft? Are the Surface tablets credible alternatives and if so are you tempted to purchase one when they become available. Send your comments to let us know your thoughts on this. 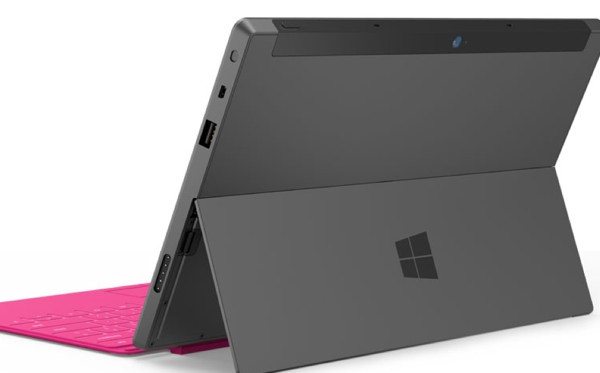