The Google Nexus 7 tablet has been a huge hit since its release several months ago and over the last few weeks we’ve been detailing the speculation about a 32GB model on the way. Google is holding an event on October 29 where we’re expecting to see the 32GB Nexus 7 confirmed but there have been so many leaks that there’s not much left to hear. Now we have heard further news for the US price and release and also it seems at least one Google Nexus 7 32GB model has already escaped there.

We’ve already told readers about rumors of a Nexus 7 32GB model with 3G connectivity although this is far from confirmed. We have seen growing evidence though of a 32GB version on the way and now all doubts that remained about a 32GB version coming have been blown apart with news that it has already been spotted on some US retailers shelves.

A Sam’s Club tag for the 32GB Nexus 7 has been photographed and sent to Engadget. You can see the photo further below and as you can see it details specs of an NVIDIA Tegra 3 quad-core processor, 7-inch IPS display, a battery that will last around 9.5 hours, Bluetooth, WiFi b/g/n and of course the Android 4.1 Jelly Bean OS. Don’t be confused by the placeholder price shown as the retail price will be $249, which as you may know is the same as the 16GB model currently available. The labeling also states a ‘Do Not Sell’ date of October 29 and so it appears it will release on the same day as the Google event. 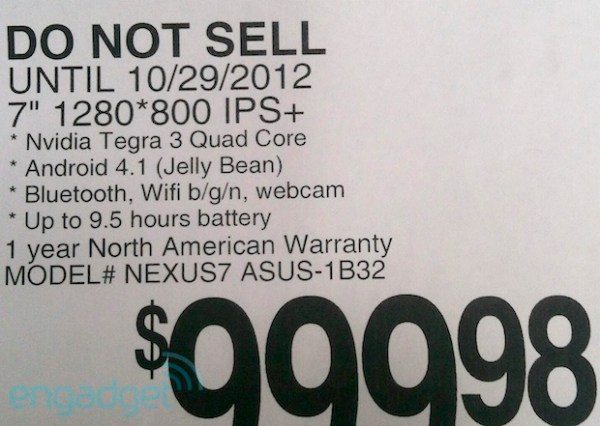 As complete confirmation, the Nexus 7 32GB tablet was also listed on the Staples website and one buyer in Japan actually received one in error and now stock has been seen at some Staple’s stores in the US. Incredibly, as The Verge reports, one person even managed to walk into a store and buy one and sent the site a photo of his receipt showing the $249 price, as well as the box as proof. The luck punter in Kissimmee simply rang his local Staples, found out that there were 3 Nexus 7 32GB models in stock and then went to the store to purchase it, returning his 8GB model and paying the difference.

There has also been an update to the Verge report as Staples sources have given them the October 29th date as the official day it will go on sale (despite the odd escape). The same sources also stated that the current 16GB model will then sell for $199 and that the store will stop stocking the 8GB Nexus 7 at the same time. It looks as though we can finally stop talking about a ‘rumored’ Nexus 7 then and look forward to hearing all the official news at the event on October 29. We are also hoping to hear more at the same event about the next Google Nexus phone, thought to be the LG Nexus 4.

We’d like to know if you’re waiting for the Nexus 7 32GB version to release? We’d also like to hear from you if you spot one already on retail store shelves or even manage to purchase one so do send us your comments about the Nexus 7 32GB tablet.