You may or may not be aware that over in the US a HTC smartphone known as the HTC 6435LVW with the codename HTC DLX is a 5-inch handset destined to play nice on the Big Red, and now it appears that when the HTC DXL does arrive on Verizon the device will have a new moniker, and the pricing for the Android handset has also been revealed.

The guys over at Android Central have got hold of a Verizon Minimum Advertised Price list, which shows that the HTC 6435LVW / HTC DLX might possibly arrive on the Big Red as the HTC Droid DNA, and that the MAP date starts on the 20th of Next month with a price tag of 200-bucks.

The Verizon MAP also reveals that the Samsung Galaxy Note 2 in both white and silver are set to land any time soon with a price tag of 299-bucks. 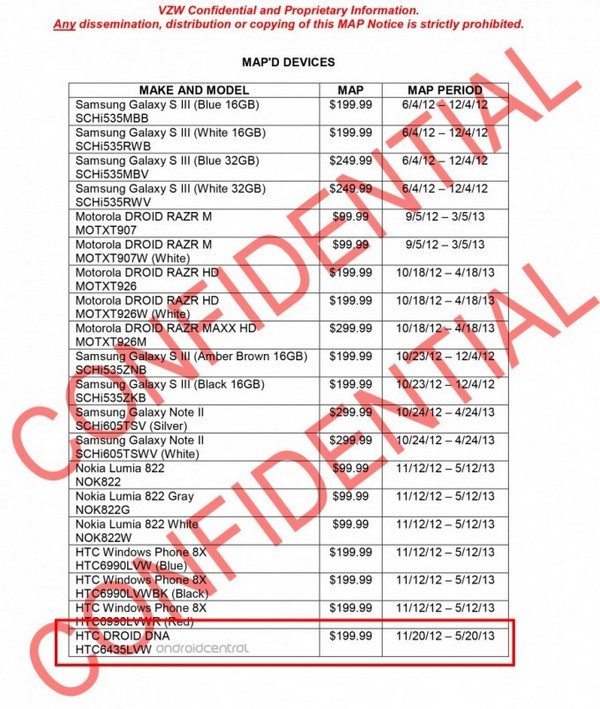 As for that HTC Droid DNA aka HTC DLX, it is suggested that the handset should sport a 5-inch 1080p touch screen like the HTC J Butterfly, with a 1.5GHz Snapdragon S4 Pro quad core processor, 2GB of RAM, 16GB of internal storage, possibly a 2500mAh battery, runs Android Jelly Bean and supports LTE.

Although of course one does have to remember that the above specs for the HTC Droid DNA for Verizon haven’t been confirmed, but if all turns out to be spot on, it would appear that the HTC Droid DNA has been give a lower price tag that high end devices usually see at about 299-bucks with the Big Red.

So what do our American readers think about the HTC Droid DNA, is it a Jelly Bean handset that captures your attention enough to want to own one?