The holiday buying season is almost upon us, and there will be many no doubt looking at picking up a new tech device, and when it comes to tablets there are two new slates to consider, the Apple iPad 4, and the new Samsung Nexus 10, and no doubt both these slates will go face to face in the run up to Christmas, but which tablet offers the most?

So what we have for our readers consideration below is a showdown between the Samsung Nexus 10 and the Apple iPad 4 that was brought to our attention by Droid-life and Gizmag who pitted both devices against each other in a comparison.

Firstly we say holiday showdown threat because these two slates will no doubt go up against each other come Christmas, but let us make it clear that we are not saying the Nexus 10 by Samsung will out do the iPad 4, but it is a worthy comparison nevertheless, so let’s get right to it and kick things off with the display. 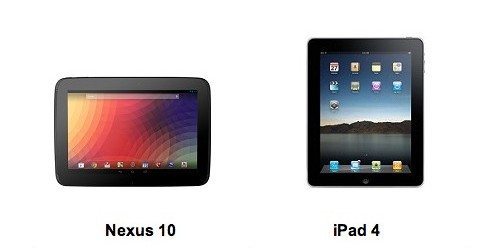 Then there are the cameras, and whilst both slates sport a 5 megapixel rear facing snapper, when it comes to the front facing camera the Samsung Nexus 10 sports a 1.9 megapixel camera whilst the Apple iPad 4 has a 1.2 megapixel snapper.

So there you have it a comparison between the Samsung Nexus 10 and the Apple iPad 4, but can the Nexus 4 do well against the iPad 4 in the run up to Christmas, well that probably depends on personal preference, what you can afford, and of course whether you prefer Android Jelly Bean or iOS 6.

Will any of our readers be picking up one of these tablets before Christmas, and if so which one will you opt for?

12 thoughts on “Nexus 10 vs iPad 4, the holiday showdown threat”