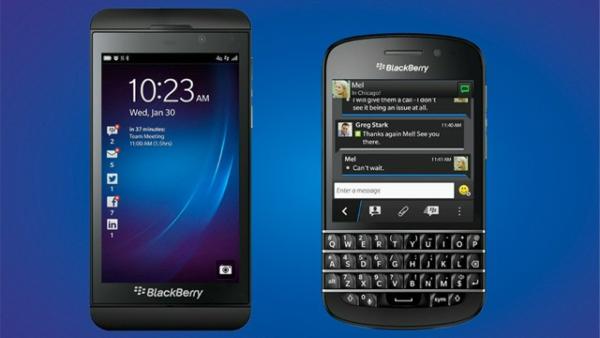 Yesterday BlackBerry, formerly RIM, showcased its new BlackBerry 10 operating system and in the process unveiled the first two handsets that will be available on the new platform. This came in the shape of the BlackBerry Q10 and the much leaked Z10 with its full touchscreen vs the physical QWERTY keyboard of the other handset.

The BlackBerry Z10 is obviously the flagship handset on the platform, but BlackBerry has stayed true to its roots by providing a physical QWERTY keyboard on the BlackBerry Q10. The Z10 comes packed with a dual core processor powering a 4.2-inch touchscreen display with a resolution of 1280 x 768, and a 356ppi pixel density.

As we have already told you consumers in the UK can purchase the device from the likes of Vodafone or Phone4U, but US consumers have to wait until March to get their hands on the device. This compares to the BlackBerry Q10 that also uses a 1.5GHz dual core processor but this comes with a QWERTY keyboard that the company says is the widest it has provided so far.

This comes paired with a 3.1-inch AMOLED touchscreen display with a 720 x 720 resolution, and also 2GB of RAM and 16GB of storage. For those that want a new BlackBerry 10 device the main decision will be whether they want a full touchscreen or a handset with a physical keyboard as well.

At the showcase yesterday the company did show off some clever features of the BlackBerry Z10 keyboard to try and make things easier for users when using it, but there are still many smartphone users that prefer physical keys when typing out emails or SMS messages.

So what do you prefer the full touchscreen of the Z10 or the physical keyboard of the BlackBerry Q10?