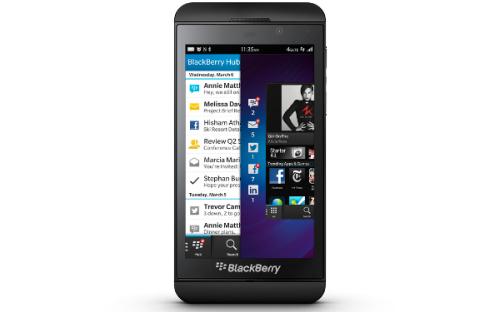 Despite its recent launch there are still a number of markets waiting to get hold of the BlackBerry 10 platform and the new hardware that comes with it. Ahead of its release the price for the BlackBerry Z10 has appeared for consumers in India.

We have already told you that the BlackBerry Z10 will be unveiled in the country this coming Monday, February 25th. Ahead of the event the handset has started to appear on a number of online retailers and priced around the Rs 45,000 price range. Both Flipkart and Tradus have the smartphone listed on their websites with the latter company saying shipping will take place in ten to fifteen days.

Obviously this may not be the official pricing for the BlackBerry Z10 but more will be known in only a few days time, but according to Tech2 the price is likely to come in at around the Rs 38,000 to Rs 43,000 mark.

It is believed the handset will be available to consumers in the country in both the black and white colour options, and to recap the handset features a 4.2-inch touchscreen display with a resolution of 1280 x 768. This is powered by a dual core processor clocked at 1.5GHz paired with 2GB of RAM, and the 16GB of on board storage can be expanded by another 64GB via a microSD card.

Camera wise you are treated to an eight megapixel rear facing shooter capable of 1080p video capture, while around the front is a two megapixel unit with 720p video recording. More specific availability and pricing should be made available on Monday, but it seems the platform will not be getting a native Instagram application.

Are you going to order the BlackBerry Z10?