BlackBerry 10 phablet rumoured for release among others 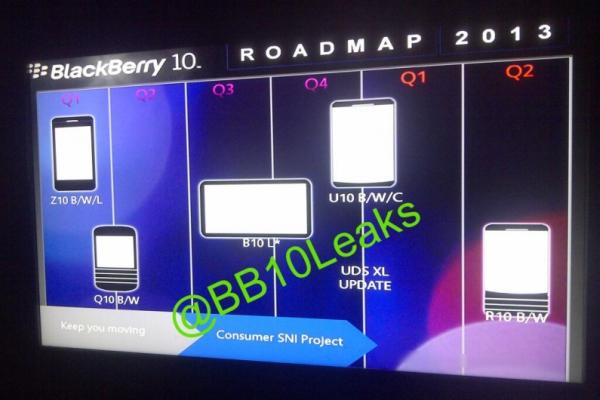 The new BlackBerry 10 OS is gathering momentum as the hardware is now reaching more markets, and next month will see the BlackBerry Q10 making an appearance. Now today there are reports that a BlackBerry phablet device is rumoured for release this year among other hardware.

We recently heard that a flagship device was due to be released at some point this year that company CEO Thorsten Heins is really excited about. A now a recently created Twitter account has leaked what is supposedly a roadmap for the platform that includes handsets we already know about, as well as a tablet and phablet devices.

The image has some possible codenames and we already know about the Z10 and Q10, but during the third quarter according to this roadmap a tablet could be coming and we have already heard conflicting reports about such a device being released this year.

According to this information towards the end of this year going into 2014 a phablet type device could be released by the company, and could be the device that the CEO is getting so excited about. This information has to be taken with a pinch of salt though as previously Heins suggested that all the hardware on the platform will feature the same sized displays.

This is to help developers when it comes to providing applications for the operating system, but CEO’s have been known in the past to not to be so forth coming with the facts to help prevent upcoming products being leaked early.

Would you like to see a BlackBerry 10 phablet device?

One thought on “BlackBerry 10 phablet rumoured for release among others”