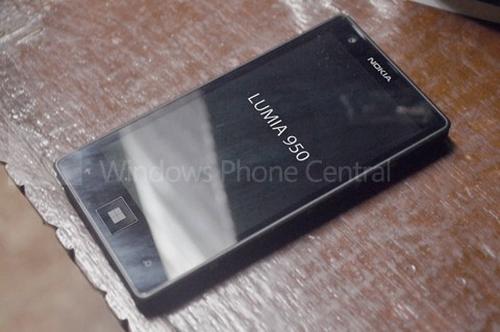 Late last year both Microsoft and Nokia launched the new Windows Phone 8 operating system, which saw the release of the Lumia 920 smartphone that currently remains the top-end handset on the platform. Now today we have news of a possible Nokia Lumia 950 flagship device that has appeared with an image and specs.

Since the Lumia 920 became available there have been a number of rumours of what the next flagship handset from the company will be. We have heard talk of a Lumia 928 device destined for Verizon and a new device tipped to be stunning.

Now the guys over at WPCentral have been sent the image you can see on this page along with some specs for the alleged device, which like any rumour such as this has to be taken with a pinch of salt. The image could be the real deal just as easily as it could be faked but the tipster has also provided some specs for the device that includes a display with a resolution of 1280 x 768.

The main focus of the handset will be battery life as the platform doesn’t currently support Full HD displays, and this new device will be using a revamped AMOLED PureMotion HD screen that is used for the Lumia 920.

Other features are said to include 2GB of RAM and a camera sensor that won’t quite match the 41-Megapixel unit found in the 808 PureView, but still a step up to what the company currently provides in its Lumia range.

Do you think this device is the real deal or a clever bit of Photoshop work?