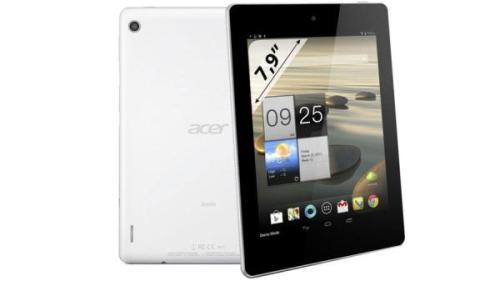 While Apple has dominated the tablet market over the last couple of years the competition is growing tougher all the time with high spec cheaper alternatives becoming available. Now the recently leaked Acer Iconia A1 iPad mini rival gets closer with a pre-release preview.

We first heard about the Acer Iconia A1 earlier this month with the device certainly going to strengthen the Android platform tablet wise, and will be replacing the affordable Acer Iconia B1.

The preview is confirming the new model will be taking on the likes of the iPad mini as well as the Nexus 7 and will feature a 7.9-inch IPS touchscreen display, which offers wide viewing angles with a resolution of 1024 x 768 that is the same as the current iPad mini model.

This is an upgrade from the low quality display that came on the B1 but the device is slightly thicker measuring 11.1mm compared to 9.78mm. The tablet has some worthy specs though as apart from the display there is a MediaTek MT8125 quad core processor under the hood with 1GB of RAM.

There is also a PowerVR SGX GPU taking care of the graphics while internal storage will come in either 8GB or 16GB options, which is expandable thanks to microSD card support. Camera wise there is a 5-megapixel unit fitted to the back capable of Full HD video capture with a VGA front facer.

The device is fitted with a 3,250 mAh battery and is expected by the end of June and will cost around the â‚¬169 mark, which by that time we should have access to the new Nexus 7 that is believed to offer a Full HD display among its specs.