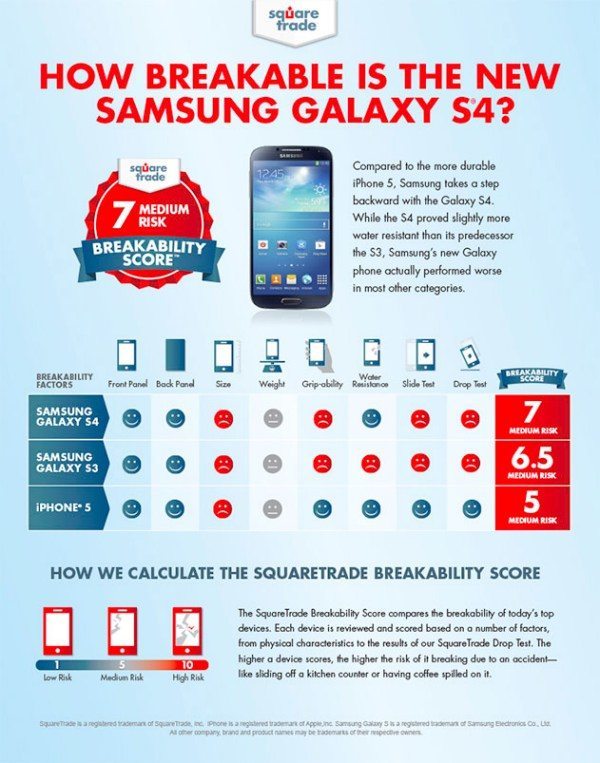 The Samsung Galaxy S4 smartphone is an Android device and already destined for huge success. Although we’ve previously given you spec comparisons, today we have news of an interesting Galaxy S4 vs. S3 vs. iPhone 5 breakability test where surprisingly there were some rather mediocre results and the most recent of these three handsets came off worse.

The Samsung Galaxy S3 and Apple iPhone 5 were both released last year whereas the Galaxy S4 release is rolling out right now on multiple carriers across the world. We always imagine that each new iteration of a popular phone will not only have better specs but also increased durability but according to these latest tests that appears not to be the case.

Testing was carried out on all three devices by SquareTrade to find out just how breakable the Galaxy S4 was compared to the S3 and iPhone 5 and these tests included putting the phones in water, drop tests, slide tests, grip-ability and looking at physical characteristics. When testing the endurance of these devices they were all placed at equal height from a holder for drop tests and placed in water all over for fairness.

Bear in mind however that although they all have Corning Gorilla Glass for extra toughness, the Galaxy S4 is the only one of them to have the latest Gorilla Glass 3 version. Considering this, some of the results may surprise you. You can see all of the test ratings in the image below and the breakability scores are all based on a risk factor where 1 is low risk, 5 is medium risk and 10 is a high risk of breakage across all of the tests.

As you can see the breakability score for the Samsung Galaxy S4 was highest at 7 while for the Galaxy S3 it was 6.5 and the iPhone 5 scored a 5. Even last year’s Galaxy S3 managed to attain a lower score of breakability risk than its newer Galaxy S arrival, which again we wouldn’t have expected. Recently we also showed readers a Galaxy S4 and iPhone 5 drop test video where the latter also managed a better result than the Galaxy S4. You can also see a video of some of SquareTrade’s testing of the three phones below this story.

This is quite startling as about the only criticism of the Galaxy S4 is its rather cheap-looking plastic build. Although you would have thought this would have lent itself to more durability compared to the glass and metal construction of the iPhone 5, the opposite was found. These results could be rather a blow to those who are just about to purchase the Galaxy S4, especially the more clumsy among us but of course many consumers will not be put off as in most ways the S4 is a very impressive smartphone.

We’d really like to hear what you think about the results of this breakability testing for the Galaxy S4 vs S3 vs iPhone 5. Are you surprised that the Galaxy S4 doesn’t match up to either its predecessor or Apple’s latest iPhone in these tests? Maybe it makes no difference to you at all and you will still go ahead and buy the Galaxy S4? Let us know with your comments.