Alcatel One Touch Idol Ultra goes on sale in Asia 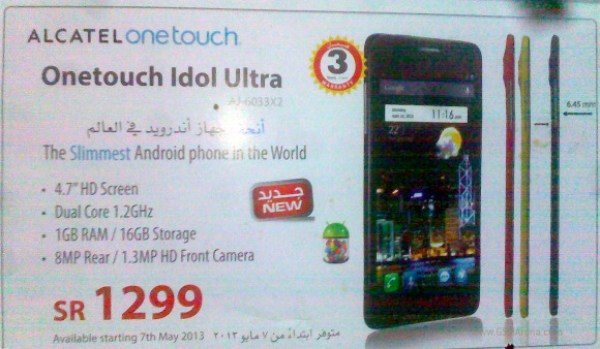 If you’ve been waiting for release news for the Alcatel One Touch Idol Ultra smartphone then we can tell you that it is now available in some Asian markets. For now this is claimed to be the world’s slimmest smartphone although we’ve now seen various devices claiming that title. It’s still extremely slim though and we have more details ahead.

Way back in January we heard that the Alcatel One Touch Idol Ultra would not be releasing in the US or UK but some regions of Asia will definitely be selling this phone. Although its stated measurement by Alcatel is 6.45mm thick this is debatable as the thickest part of the phone measures more around the camera module area. Also we recently told how of the UMeox X5 phone that will measure only 5.6mm thick when it eventually launches.

The image below shows an ad for the Alcatel One Touch Idol Ultra with a price of SR 1299 and you can clearly see a release date of May 7. If you’re in Asia have you seen this on sale in your country yet? Maybe you could share the information with other readers by sending us your comments.