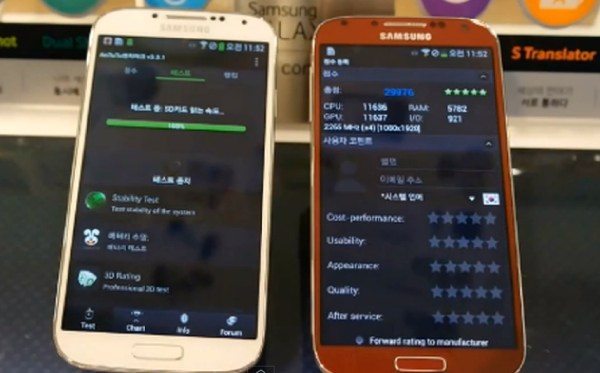 Although the standard Galaxy S4 is a very impressive handset, the Samsung Galaxy S4 LTE-A (Advanced) has caused a huge wave of interest. One of the reasons for this is that it uses the coveted Qualcomm Snapdragon 800 chip. We first heard rumors of this possibility earlier this month following an AnTuTu benchmark spot, and this was then confirmed by Samsung who said that the LTE-A version of the S4 would be able to transmit data at double the usual speeds.

It will launch in South Korea on SK Telecom’s new LTE-Advanced network and apart from LTE-A support and the Snapdragon 800 processor, the remaining specs are the same as for the usual Galaxy S4. Although LTE Advanced networks are not yet available in most regions, LTE-A offers double the upload and download speeds of standard LTE, and the addition of the Snapdragon 800 SoC will make this a very desirable device.

Feel free to check out the videos showing the benchmarks below, and give us your thoughts on the superior performance of the Samsung Galaxy S4 LTE-A vs. the regular Galaxy S4. (Please note there is no sound on these videos and the LTE-A version is on the right). Let us have your comments on this. Will you purchase the LTE Advanced version of the Galaxy S4 if it releases in your region?

One thought on “Samsung Galaxy S4 LTE-A vs. S4 in visual review”