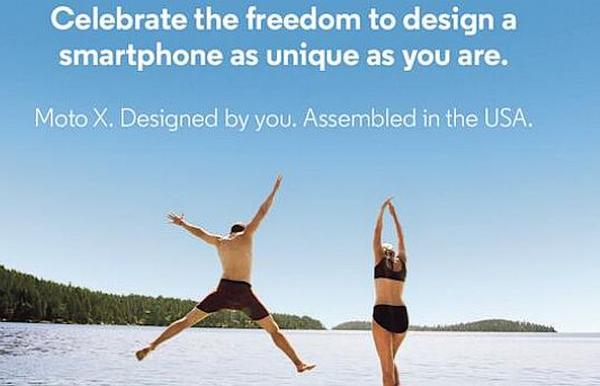 It was just before Christmas last year that we first started to hear rumours about Google and Motorola working on some new hardware that included a smartphone, which then was followed with months of rumours and speculation. Now the Motorola Moto X phone customizable features have been revealed.

The rumours got underway back in December and rumbled along until more recently we started to see ads appear, and now more titbits have been revealed that include users getting the chance to customize the handset.

Back in March rumours appeared that suggested that the handset would be customizable, and now the ad that you can see on this page clearly mentions “designed by you”. While this doesn’t give much detail into what can be changed by the user ABC News has discovered more details on this, which include users being able to choose the colour of the handset.

Users can also send in a picture so it can be used as a default wallpaper and they can have something engraved onto the handset, and while it isn’t hard to have your own personal wallpaper on a smartphone users could get something set up to add a nice personal touch if they are purchasing the device as a gift.

The device will ship with Android 4.2.2 Jelly Bean and because it is going to be made in the US it shouldn’t take too long for orders to arrive to customers, at least in the US. All the major carriers in the country will be providing the device and Verizon will not be having their DROID branding on the device.

Instead it will have Moto X and it is claimed that the voice controls for the handset will be better than what is on offer presently, as it can apparently work out if you are driving or not so the speaker will be automatically switched on.

The device is currently in testing with US carriers and is still listed as coming soon and it is not clear on the availability of the handset in other markets.

Do you think the Motorola Moto X will be worth considering?