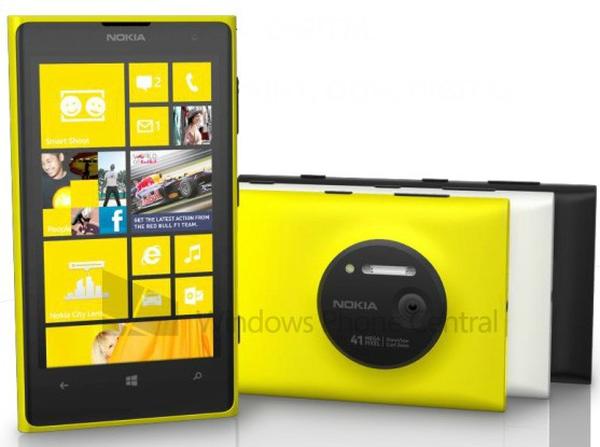 Nokia has been busy in the last few months releasing a number of different handsets that have included flagship products and feature phones. Now the much rumoured Nokia Lumia 1020 aka EOS has appeared along with news of its launch event live streaming.

Nokia hasn’t done a great job keeping the wraps on its upcoming Lumia 1020 recently, as only yesterday we saw a case along with a charging accessory appear. Now though the handset has appeared courtesy of a press image that you can see on this page.

It can be seen that the handset will be available in black, white, and yellow colour options and the design of the handset fits in with earlier component leaks that appeared. The camera module will certainly add quite a bit of bulk to the handset that will feature a 41-meagpixel Carl Zeiss sensor, but the device does look slimmer than the Nokia 808 PureView.

Other specifications of the handset are claimed to include a Xenon and LED flash, option to take 32MP and 5MP Images at the same time, 2GB of RAM, 32GB of non-expandable storage, FM radio, NFC, and optional wireless charging rear cover.

The press event is taking place in New York on Thursday, July 11th kicking off at 11am EST or 4PM in the UK, and the company is set to stream the event live via its Nokia Conversations website. It remains to be seen how popular the device will be now especially as there is the Galaxy S4 Zoom to rival it, and previously we told you how much the handset might cost and when it will be available but hopefully all will be known in a couple of days.

Will you consider getting the Nokia Lumia 1020?