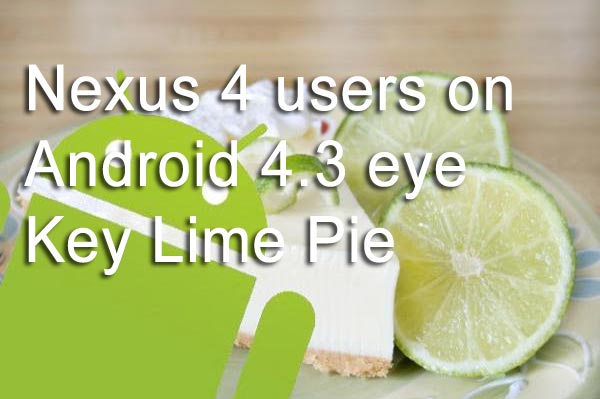 We touched on some Nexus 4 heating problems with the Android 4.3 update just over a week ago, which was then followed up with a list of the issues found so far with the OTA Nexus 4 update. These articles receive a lot of feedback and way more Android 4.3 problems than we first saw, although it is fair to say not all of these issues are experienced by all users with some being isolated cases.

Nexus 4 users on Android 4.3 eye 5.0 update — towards the end of last month we noted that the Android Key Lime Pie release date was closing in pretty fast, and we expect it to be on the horizon. After taking a look at some of the latest rumors, it seems that Android 5.0 will launch on higher end devices around October time.

Now that we have seen so many complaints from Nexus 4 users running the Android 4.3 update, it is also worth noting that a growing number of these people are putting the current problems aside and looking towards Android 5.0. Nexus 4 owners know they will be one of the first to receive this update, which could also appear on a new handset like the Nexus 5.

You can read some insight into the Nexus 5 after the Moto X phone release and how some people have a few worries. After looking at different specs, we have to wonder if the Nexus 5 will launch this year now that the Moto X is here? One thing is clear with a lot of fans, and this is that there’s a lot of hope still for LG to make the Nexus 5 and for a launch event in October.