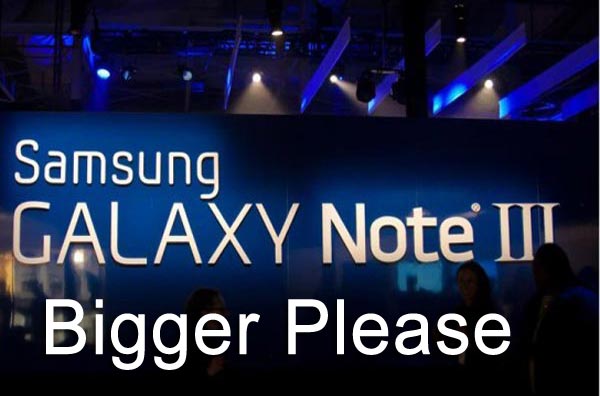 Those looking at the potential Samsung Galaxy Note 3 release date within the next month are clear about what they want in terms of specs, although some of these smartphone users still haven’t made the jump to phablet and might be a little shocked from screen size desires of Galaxy Note 2 and Note 1 owners. It seems the popular saying bigger is better might just be true when it comes to the Galaxy Note 3 display size.

For some people the launch date is set already after looking at recent invitations for the Unpacked Event. Earlier this week we highlighted the clue left in plain sight on the invites, which basically left a massive hint towards the Samsung Galaxy Note 3 launch date.

Just under one week ago we looked at how some fans had a lot of faith in the longevity of expected Galaxy Note 3 specs, and some people believed the Note 2 was still powerful enough for everything they needed while others pointed to some major new upgrades on the way. The idea of a Samsung Galaxy Note 3 with the specs we’ve already heard, or even Note 4 with ultraHD, 128GB mobile SSD, improved WACOM technology, flexible OLED screens and 6GB RAM modulus reveals a need to upgrade. These features alone show a few reasons to upgrade at some point when comparing to the Note 2 or original phablet specs.

Samsung Galaxy Note 3 onlookers shout bigger — the majority of fans we have seen listing specs have one thing in common and that’s where screen size is concerned. “5.7-inch doesn’t feel right for me, Samsung needs to release a larger sized Galaxy Note 3 or 3.1”, one potential buyer said. Another states, “Galaxy Note 3 will be a disappointment if the screen size is not at least 6.3 inch. A 6.5-inch or 7-inch screen will be better”.

Another Phones Review reader said, “I would be happy with a 6-inch display but not a 5.7-inch. Samsung is missing the point here if they go that small while the competition is going much bigger, especially after they started it all with the Note. Would be better to have multiple size options. If I have to choose between Galaxy Note 3 at 5.7-inch and Sony 6.4-inch then it is bye Samsung”.

This is just a few of many similar comments and a few owners of the Note 2 say, “I will wait one more year if needed”. When it comes to the original Note the choice to upgrade is a lot simpler in many cases, which is thanks to the Samsung Galaxy Note 3 being a major update for them in terms of expected specs and features.

Are you shouting bigger for Samsung Galaxy Note 3, and if so how big do you want the screen to go?