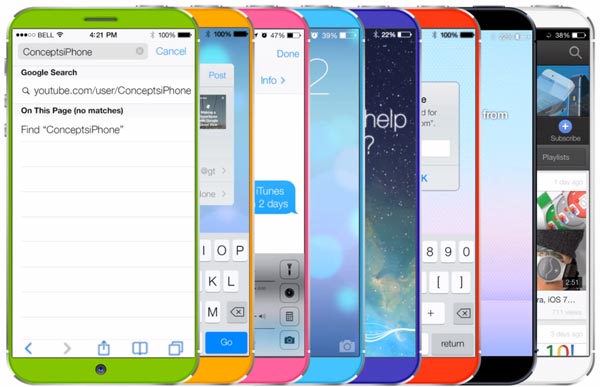 The desire for a bigger new iPhone 6 won’t die and has been given new life thanks to a concept video landing on YouTube within the last few days. Appropriately named the iPhablet, this handset would feature a bigger 6.2-inch display and is certainly something thousands of potential buyers want after Apple has kept the screen size pretty much the same since the first generation.

This new iPhone 6 concept video has targeted popular phablet rumors pretty well; although this is something most concepts do after tracking the latest rumors and then designing something around them.

You will find this bigger iPhone 6 with a number of features that are both new and based on Apple patents. They include a fingerprint sensor like you’ve seen in a recent patent, 8 colors similar to the leaked parts arriving online, a 10MP camera, 2.5GB of RAM, 4G LTE and an A8 Apple chip.

When it comes to storage this new iPhone 6 concept points to a range of sizes from 64GB right up to 256GB, which we know would make some storage hungry iOS users happy but would certainly come at a price.

Would you like to see a new iPhone 6 as a phablet? You can find the concept video below this article and see the range of specs along with different colors. It is fair to say that a lot of Apple fans wouldn’t want a massive screen, and some would rather see a slightly bigger display but an edge-to-edge display could reduce the overall form factor.

Moving away from iPhone 6 concept designs that sometimes live in a dream world, you can see how thinner devices will be possible thanks to new Apple patents in a previous article. This would allow for new battery technology, thinner camera designs and a lot more.

We highlighted a few dates our readers should be aware of that forecast when invites might arrive for Apple’s iPhone event in September. This press conference should showcase a new 5S and 5C model, although September 10 is also rumored to be the same date iOS 7 Gold Master arrives for download.