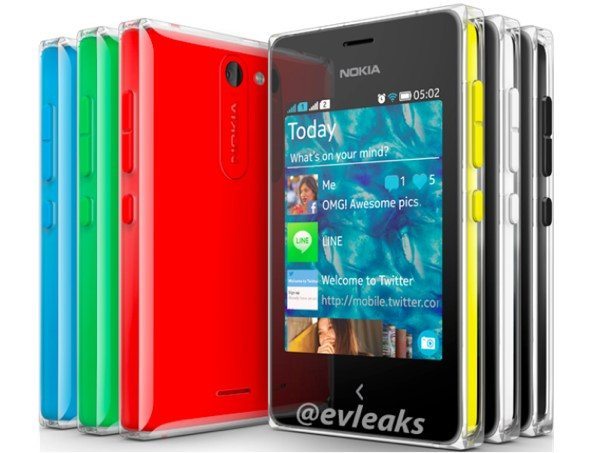 The Nokia Asha 502 is a new phone that many expect to be officially introduced at an October Nokia event. Today a Nokia Asha 502 press image leaked out, to tease us before the official announcement.

This new image leak follows hot on the heels of a leaked image last week of the Nokia Asha 500. A Nokia event is taking place on October 22 in Abu Dhabi, where it’s anticipated we will see the unveiling of the Nokia Lumia 1520 phablet, and also these new Asha handsets and more.

The Asha 502 image that you can see here shows the phone in 6 different vivid colors, black, blue, green, red, white, and yellow. It looks pretty similar to the Nokia Asha 500 that we saw over a week ago, as you might expect.

It’s rumored that the camera on the Nokia Asha 502 features LED flash, and it will include dual-SIM and Wi-Fi. Other than that, very little else has leaked out so far on specs.

While we cannot verify the authenticity of the above leaked image of the Nokia Asha 502, it does come from prolific leaker @evleaks, which does have an excellent reputation as a reliable source of product leaks.

There’s only a few more weeks until the upcoming Nokia event in October, so with any luck we shall soon be able to bring you full confirmed specs of the new Nokia Asha phones, as well as the Lumia 1520.

Are you a fan of Nokia Asha devices? Do you like the look of the Asha 502 as it appears in this leaked press render? Let us have your comments on this.