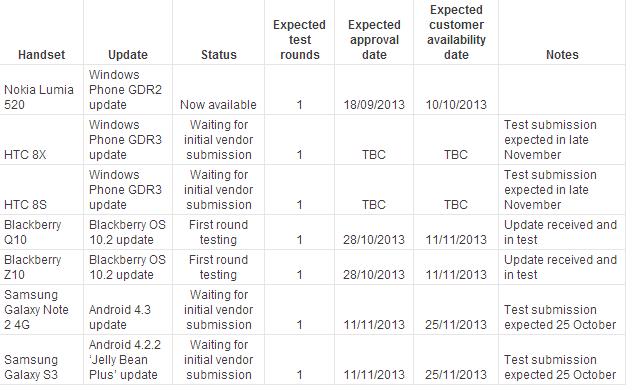 Samsung has been busy in the last few days or so pushing out the Android 4.3 Jelly Bean update to the Galaxy S4, and it was widely believed that older devices would be next in line to receive the same firmware, but now the Galaxy S3 is the centre of a strange carrier Android 4.2.2 update claim.

A few days ago Samsung provided details about a number of handsets that included the Galaxy S3 about the Android 4.3 update and the features it will bring. The device has long been down to be skipping past Android 4.2.2 and heading straight to Android 4.3, and it has even been seen running on handsets before its official release.

Now Australian carrier Telstra has provided an update of its firmware update roadmap and has the Samsung Galaxy S3 down to be receiving Android 4.2.2 Jelly Bean with testing due to begin tomorrow October 25th.

The posting has obviously seen some responses from customers of the carrier who asked if it was a typo, but it seems that it isn’t a mistake. Other users have suggested that Samsung could be having issues upgrading the handset from Android 4.1.2 to 4.3, so instead are going to use the Android 4.2.2 firmware as a stepping stone to the latest version of Jelly Bean.

It would be surprising if the carrier did update the handset to Android 4.2 when all indications including the noises coming out of Samsung hint the handset is set for Android 4.3, and the carrier does have the Galaxy Note 2 down to get the later software.