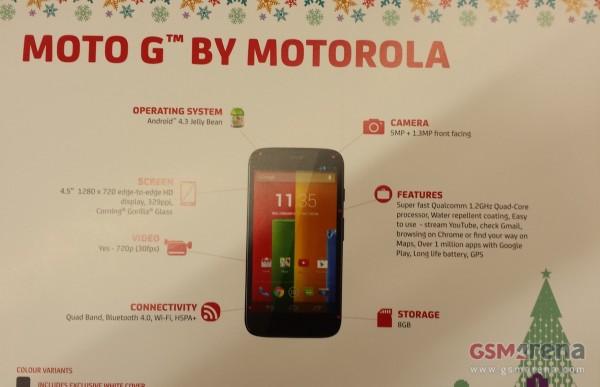 There looks like there will be at least one more major smartphone release coming before the end of the year courtesy of Motorola, as the Moto G pricing and specification clues appear before an official launch.

Smartphone users in the US have been treated to the Motorola Moto X and the company did say that another handset would be made available in other regions. The device was first being called the DVX which a source we have close to a major UK retailer confirmed, but this seems to be just the code name for the device which is now known as the Motorola Moto G.

Yesterday we had some images of the device appear and now some others have emerged courtesy of GSM Arena that you can see on this page. The image is allegedly from promotional material that is destined for a Phones 4U store and as you can see it has a Christmas theme.

Our source from a rival UK retailer has stated that the phone will be released this month after seeing a delay, but according to the card the handset will feature a 4.5-inch 720p touchscreen display with 329ppi pixel density that is protected by Corning Gorilla Glass.

Other specs are listed as a quad core Qualcomm Snapdragon processor clocked at 1.2GHz running the Android 4.3 Jelly Bean operating system. Other specifications are down as having a 5-megapixel rear facing camera paired with a 1.2-megapixel front facer.

On board storage is at 8GB while these specs do differ slightly from what was reported yesterday, and the Motorola Moto G is tipped to be priced at Â£134.95 without a contract.

Do you like the look of the Moto G?

One thought on “Motorola Moto G pricing and specification clues”