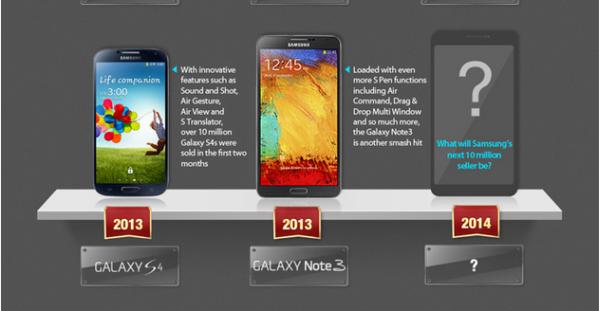 Samsung has been enjoying a pretty successful couple of years in the smartphone world with the release of some highly desirable handsets, and now the sales for the Samsung Galaxy Note 3 have been revealed with a possible larger 2014 display hint in tow.

The Samsung Galaxy Note 3 is arguably one of the most sought after handsets currently available on the Android platform, and now it has been revealed that the device has sold 10 million units in only 60 days since it became available towards the end of September.

This year’s Galaxy Note smartphone is selling twice as fast as its predecessor while the original Galaxy Note device took nine months to reach this level. It took only 28 days for the Note 3 to reach 5 million sold units.

These figures are actual sales of the device and not shipments and to celebrate the news the company has released an infographic displaying all the handsets that have broken through the 10 million barrier.

The Infographic begins back in 2002 with the Samsung SGH-T100 clamshell feature phone working down to the present day, with an image for 2014 that shows a device that is slightly larger display than the Galaxy Note 3.

As you look down through the image there are a number of handsets that include the original Samsung Galaxy S that was arguably the device that got the ball rolling for the success that the company enjoys today.

Are you impressed with these sales figures and have you owned many of the handsets included in the 10 Million Club?