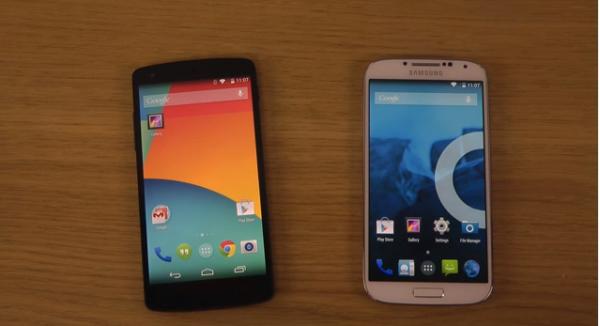 The Android platform is awash with desirable handsets from a number of different companies and today we have the Samsung Galaxy S4 CyanogenMod 11 4.4 vs. Nexus 5 Android 4.4.2 in a video speed test.

There will be many owners of the Galaxy S4 that have installed a custom ROM onto their handset to give them an early taste of KitKat, and below this article we have embedded a video looking at the speed of the two handsets.

The video begins by giving us a look at the two handsets information on the software they are both running before the user powers down the two devices. The LG Nexus 5 shuts down almost straight away with the Samsung Galaxy S4 following shortly afterwards.

We then get to see how quickly the two smartphones boot back up with the Nexus 5 just beating the Galaxy S4, but the Google Now option works better on the S4 highlighting the bugs that have been found in Android 4.4.2..

The updates to the Samsung’s camera are highlighted which doesn’t work correctly with the focus function.