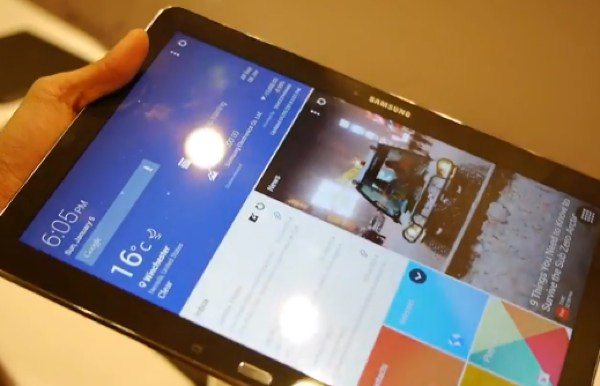 Other specs include a 12.2-inch Super Clear LCD display with 2560 x 1600 resolution and 247 ppi, 3GB of RAM and 8-megapixel rear camera. Another plus point is that the tablet will be running Android 4.4 KitKat out of the box and it also has a new UI dubbed Magazine UX.

The Galaxy Note Pro 12.2 also has the added advantage of the popular S Pen stylus that features for other Galaxy Note devices. The first hands-on YouTube video that you can view below this story packs a lot into its short running time. It shows the Magazine UX with its tablet-friendly tiled interface and this gets some positive praise. This video will also give you a good overview of the device.

The second YouTube video below is a 3-minute guide to the tablet and gives some nice close-up looks at the device. It shows the S Pen being used with the new environment and an accessory for the Galaxy Note Pro is also shown, a Bluetooth mouse. You’ll also see a nice hardware tour of the tablet.

The final video that we have for your delectation shows another hands-on experience with the Note Pro 12.2 and is a longer 5-minute look around the tablet. It begins with showing the design and goes on to show the similar faux-leather reverse with stitching that appears on the Galaxy Note 3. It also details the display, which leaves a good impression, and then some of the other key specs plus more information on the user experience.

Overall, these hands-on looks appear to be pretty positive about the Samsung Galaxy NotePro 12.2, and of course we’ll be seeing more in-depth looks and reviews of the device before too long. You may also be interested in checking our recent specs comparison of the Galaxy Note Pro 12.2 vs. Galaxy Tab Pro 12.2 vs. iPad Air.

After you’ve taken a look at the videos embedded below we’d be interested to receive your comments. Are you generally impressed by the Samsung Galaxy Note Pro 12.2 tablet? Do you think you might purchase one yourself when it releases?