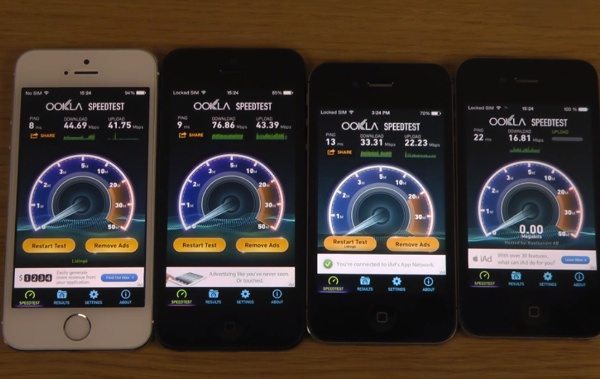 A few days ago Apple released iOS 7.1 beta 4 to developers who continue to test out the latest build of the 7.1 update. It may be some time yet before we see an iOS 7.1 public release, but in the meantime we thought readers might be interested in an iPhone 5S, 5, 4S and 4 iOS 7.1 beta 4 Internet speed test.

A few days ago we shared an iOS 7.1 beta 4 video look at what’s new and the final version is rumoured for a release to the public at some time in March, although this is unconfirmed. While we’re waiting we thought it would be good to look at speed tests for various iPhones to see how they compare with the same operating system software.

The 9-minute YouTube video that we’ve embedded for you below this post compares Internet speeds for the iPhone 5S vs. iPhone 5 vs. iPhone 4S vs. iPhone 4. The video begins with showing that all of the four handsets are running iOS 7.1 beta 4 and initially there are some connection problems shown.

Once this hitch is resolved the Ookla Internet speed test app is then opened up on each phone. First you’ll see the test performed on the iPhone 5S before the reviewer goes on to begin the test on the other three devices.

This is intriguing stuff and we’ll be really interested to see the Internet speed test run once more on these same devices once iOS 7.1 beta 5 is made available. You can see all of the individual speeds for these iPhones in the video below. Once you’ve checked it out we’d love to hear your views on this.

Are you surprised that in this iOS 7.1 beta 4 Internet speed test the iPhone 5 beat the later iPhone 5S every time? Drop us a comment about this.