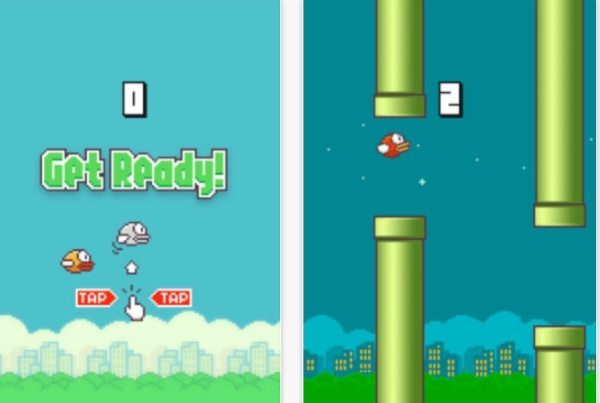 Every now and then a new gaming app comes along that suddenly takes the world by storm and at the moment it’s Flappy Bird that’s grabbing all the headlines. The game may look simple but that’s deceptive as it becomes extremely challenging. Today we have news of a Flappy Bird app update and also want to discuss its addictive nature.

We’ll start with the update news and it’s the iOS update that has just received an upgrade to version 1.2. The update brings new birds, improved frame rate, new UI, and bug fixes. You can see details of the iOS app at iTunes here or the Android version is at Google Play. A Windows Phone version is also on the way.

Now we want to mention the addictive aspects of this game. Flappy Birds has surprised many people because on the face of it you just tap to flap the wings and fly, and all you have to do is avoid the pipes along the way and earn medals. However, many people have now tried the game just to see what all the fuss is about and have ended up hooked.

We’ve been taking a look through user comments on the app descriptions and to be honest the word ‘addictive’ almost seems inadequate to describe the fervour that this game is generating for some players. In fact some are so passionate about the game that it’s rather alarming.

Others talk about becoming angry when playing the game, to the point where they want to throw their device against a wall. We even saw one commenter warn people not to download the game if they are currently under any kind of stress, although we should point out that some of the comments are probably tongue in cheek and its difficult to tell whether they are serious or not.

One player seems to have it all sussed though and has come up with a list of simple rules for when playing Flappy Bird. These include clearing your mind before you begin, not playing when you are mad, irritated, or in a negative mindset, playing only to have fun and not to beat other’s highest scores, and not turning the volume on (to avoid the sound of the bird dying).

It’s a little alarming to hear that some people seem to be taking their obsession with the game too far, although we’d point out that this can happen with many other activities and games. However, it’s good to see that plenty of others are keeping a sense of perspective and continuing to enjoy the game with the right approach. We’d love to hear what readers think about the Flappy Bird app.

Have you become obsessed with Flappy Bird scores and cheats? Do you find you’re so addicted to playing it that it’s having a negative affect on your life? Maybe you’re one of the many people who are just having pure fun playing Flappy Bird and love the game? Drop us a comment using the box below to share your thoughts on Flappy Bird.