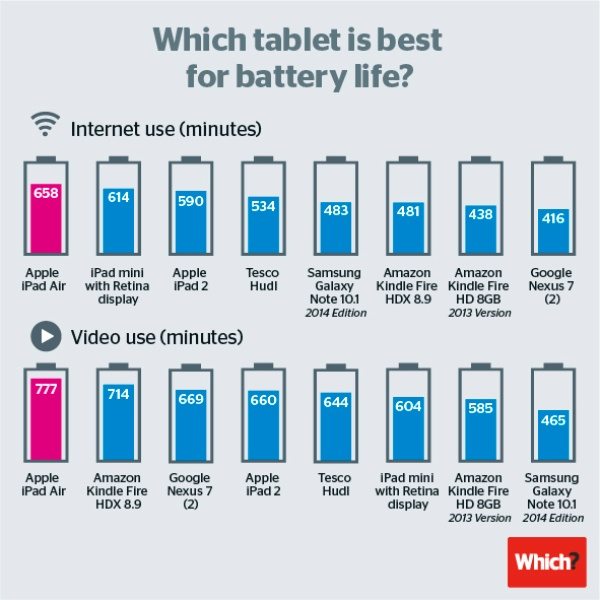 If battery life is an important consideration for you when buying a new tablet then you will be interested in recent battery life testing comparing some of the most popular tablets. It was found that the iPad Air tops the tablet battery life chart, and for Internet use specifically, the top three places were taken by Apple tablets.

As you can see from the image below, for Internet use the iPad Air was in first place followed by the iPad mini with Retina display and iPad 2 in second and third places respectively. These were followed by the Tesco Hudl, the Samsung Galaxy Note 10.1 (2014), Amazon Kindle Fire HDX 8.9, Amazon Kindle Fire HD 8GB 2013 version, and Google Nexus 7 (2013), in that order.

The Apple iPad Air managed an impressive 658 minutes of Internet use with quite a gap before the second placed iPad Mini 2 on 614 minutes. Languishing at the bottom was the very popular Google Nexus 7 2 with 416 minutes.

For video use testing the first three places were taken by the iPad Air (777 minutes), Amazon Kindle Fire HDX 8.9 (714 minutes), and Google Nexus 7 2013 (669 minutes) respectively, so the Nexus 7 tablet performed much better in this respect. These were followed by the iPad 2, Tesco Hudl, iPad mini Retina, Amazon Kindle Fire HD 8GB 2013, and Samsung Galaxy Note 10.1 (2014) in that order, with the Samsung tablet only achieving 465 minutes.

The iPad mini 2 didn’t fare so well in this respect then, and we’re a bit surprised to find the latest Galaxy Note 10.1 at the bottom for video use, as this is such a popular high-end tablet. It’s interesting to note that in recent speed tests that were also conducted by Which, it was the Galaxy Note 10.1 2014 that beat the iPad Air into second place.

If you want to see exactly how this battery life testing was conducted you can check out the source link below this article. You may also be interested in our recent article concerning breakability testing involving popular devices, where the iPad mini was judged most fragile, while the iPad Air was in third place.

The testing shows that no one device seems to have it all. Some may be fastest, some may be the most durable, and some might have the best battery life, but they are rarely the same product. Are you impressed by the battery life of the iPad Air? Maybe other factors are more important to you?