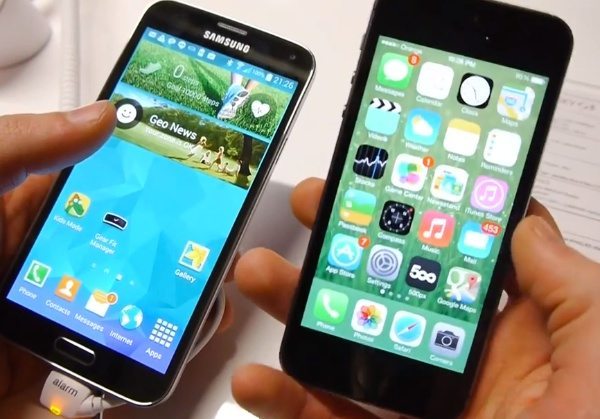 The Samsung Galaxy S5 was introduced in a blaze of publicity yesterday and after all of the excitement building over the last few months we finally had confirmation of specs and more. Will this smartphone live up to the hype, and how will it fare against the Apple iPhone 5S? We’re looking at the Samsung Galaxy S5 vs. iPhone 5S premium handsets to find out.

The Galaxy S5 will release from April 11 across many regions worldwide and will no doubt find plenty of buyers from the legions of existing Samsung Galaxy device fans and people who will decide to try out a Samsung flagship for the first time. However, when we gave full details of the phone with specs yesterday, we felt that maybe it was a little underwhelming and hadn’t quite lived up to expectations.

Specs are undoubtedly top-notch and the Galaxy S5 also has a new feature in the form of a fingerprint scanner, but many were hoping for a radical new design and a more premium look and feel. The design and build of the Galaxy flagship is something that has often been criticized and comments from readers we’ve received indicate that this is an area of disappointment once again, despite the new-look rear casing of the device.

Make no mistake though, this is still a phone that will fly off the shelves when it releases, and its traditional competition will be the premium offering from Apple, the iPhone 5S. Many people will stand firm to their choice of operating platform, with the Galaxy S5 using Android and the iPhone 5S an iOS device. However, there will also be some who are open-minded to either platform and so the video comparison below is a good way of summing up what they have to offer.

The 12-minute YouTube video that we’ve embedded at the bottom of this article shows an initial look at the Galaxy S5 against the iPhone 5S taken at the unveiling event yesterday. It gives a good close up look at both handsets and attempts to highlight some of the differences between the two.

The comparison review begins by discussing the design and build of the phones and it’s worth noting here that the new reverse of the Galaxy S5 gets a big thumbs-up. It’s said to give it a high-quality look and feel, even though it’s still plastic. We must say that seeing this on the video it looks perhaps more appealing than initial first impressions, although the iPhone 5S is known for its premium design and feel.

The video continues by detailing the displays and the larger screen of the Galaxy S5 is noted, before the comparison moves on to the software experience and interfaces. You’ll also see information about the processors, storage, the fact that the Galaxy S5 is water and dust-resistant, cameras, and more. One thing that quickly becomes apparent is that these really are two excellent smartphones with mass appeal.

Ultimately the video below gives a good general overview of both phones and it will be interesting to see more in-depth reviews of the Galaxy S5 over time. It will also be interesting to see what Apple offers with the iPhone 6 due later this year. We wonder what you think of the new Samsung flagship device and welcome your comments.

Do you think that once again the new Galaxy phone will be battling it out with Apple’s iPhone? Has the Samsung Galaxy S5 lived up to your expectations, or maybe you feel it’s not enough to lure you away from the iPhone? Perhaps you’ve already decided that you want to purchase the Samsung Galaxy S5?