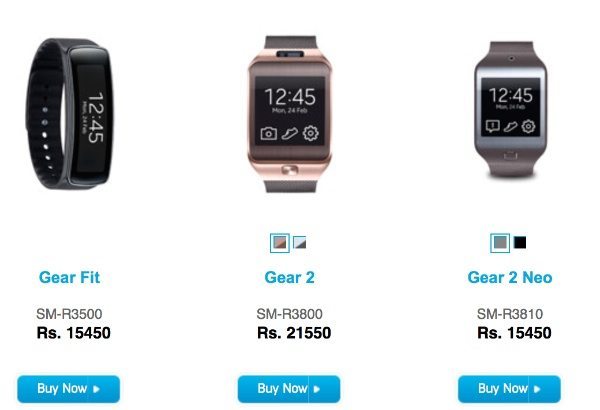 We’ve been bringing news about the new Samsung Gear 2, Gear Fit, and Gear 2 Neo devices. If you are one of our many readers in India and have been waiting to get hold of any of these, you’ll be pleased to hear that these are now officially available at Samsung online. They’ve arrived for sale a little earlier than the scheduled release date of April 11, although deliveries won’t start until after April 11th.

We’ve already posted price information about these new Samsung wearable devices for the UK and US, and now we have the prices for India. The Gear Fit and Gear 2 Neo had been given official launch prices of Rs. 15,900 but are now both available for sale, each with a Rs. 15,450 price tag, so slightly cheaper than expected.

The Gear 2 is the successor to the Samsung Galaxy Gear smartwatch, and is currently priced at Samsung online at Rs. 21,550. Have you been waiting for official online availability for the Samsung Gear Fit, Gear 2 or Gear 2 Neo in India?