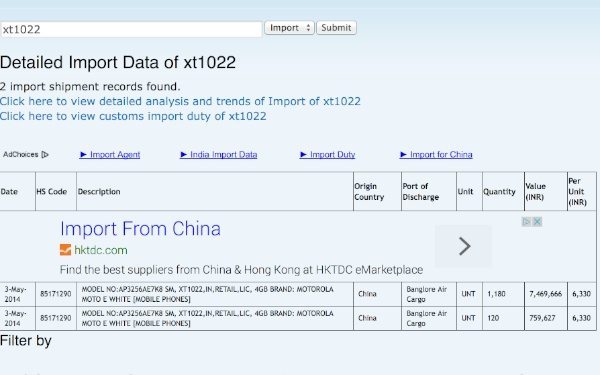 It was in April that we first heard of a new Motorola budget smartphone on the way with three different model numbers, and the next day we found out that this was dubbed the Moto E. Some specs for the device have already leaked, indicating it would be at a lower price than the Moto X. Now the Motorola Moto E in white has appeared in a listing that also gives a price value.

The three model numbers that previously emerged for this phone are XT1021, XT1022 and XT1025 with these thought to be single SIM, dual SIM and dual SIM plus digital TV variants respectively. On May 13th Motorola is set to announce a new smartphone, thought to be the Moto E, in London and it has been reported that a press event is also being held in India on the same day so the likelihood is that the Moto E will also be launched there.

We’ve often discovered snippets about upcoming products from Indian import site Zauba and now the dual SIM Moto E in white with model number XT1022 has shown up on import documentation for India. The value of the device is listed at Rs. 6,330 per unit, which equates to around $105, Â£62. While this won’t be the final retail value of the phone it does give an indicator that we are indeed talking about a very affordable handset.

The new Moto E is thought to be incredibly slim at just 6.2mm thick and from what we’ve seen so far it looks likely that Motorola could have another big hit on its hands, especially as the price looks likely to be extremely competitive. Are you eagerly waiting for the Motorola Moto E to be made official?