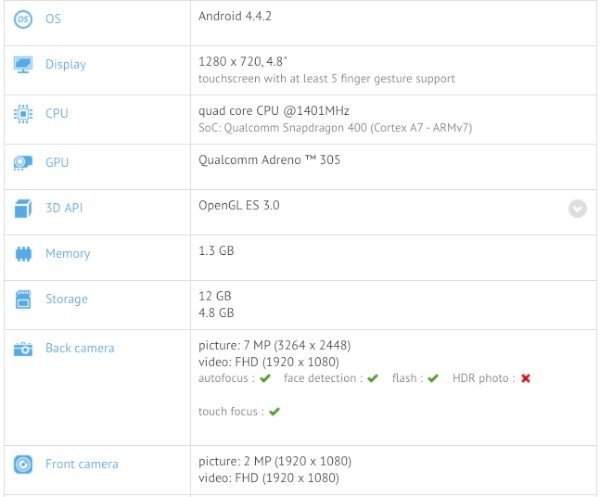 We’ve been seeing an increasing amount of leaks about the upcoming Samsung Galaxy S5 mini smartphone just lately. Recently the phone got a mention on an official Samsung site and a claimed leaked image of the handset appeared just yesterday. Now there’s another Samsung Galaxy S5 mini specs leak, this time from a benchmark database.

Some leaked specs have previously emerged for the S5 mini and one of the aspects mentioned was a 4.5-inch display 720p display. While some of the earlier unconfirmed specs are reinforced in this latest leak there is a notable difference with the display size, which is now said to be 4.8-inches and there is also some extra information.

This latest spot comes from the GFX benchmark database where many specs are listed for model SM-G800, thought to be the S5 mini. The filing reveals a 1.4GHz Snapdragon 400 quad-core processor, Adreno 305 graphics, 4.8-inch display with resolution of 1280 x 720, and 16GB of internal storage.

Other specs listed are an 8-megapixel camera with 1080p video capture and a 2-megapixel front-facing camera, and it’s said to run the Android 4.4.2 KitKat operating system. What’s most interesting here is the discrepancy in the display size compared to earlier leaks, but at this stage none of the above is confirmed so we’ll wait to see what eventually turns up.

Are you hoping that Samsung makes the Galaxy S5 mini official soon?