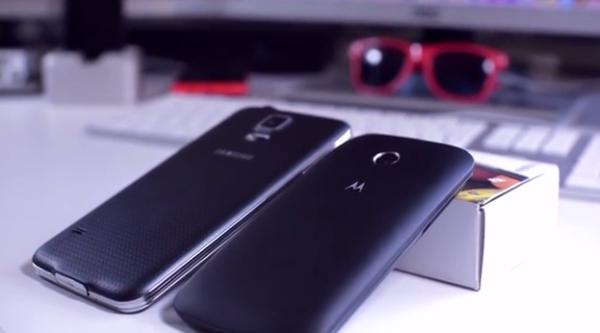 The Android platform has a huge choice of handsets available at various price points that obviously provides different levels of specifications. Today we have a Samsung Galaxy S5 vs. Moto E speed test that provides surprising results.

A week ago the budget Motorola Moto E was officially launched and while the device has been compared to the Moto G, today we have a YouTube video pitting the handset in a speed test up against the flagship Samsung Galaxy S5.

The two devices obviously don’t compare in terms of hardware specs but the video below this article notes that in terms of software performance things are not so clear cut. We get a run through the various specifications and the fact that both handsets are running the same version of the Android operating system, but the Moto E has an almost stock version of the 4.4.2 KitKat OS.

This compares to the S5 that has the added Samsung TouchWiz bloatware which as you will see in this video drastically slows down the performance of the handset. The video then goes onto to demonstrate some speed tests which demonstrate the way that Android overlays can slow down a powerful device.

This is another reason why a lot of Android fans now choose a Nexus device but as we reported previously there may not be any Nexus 6 this year in favour of the so called Android Silver program beginning next year.

Are you surprised at these results?