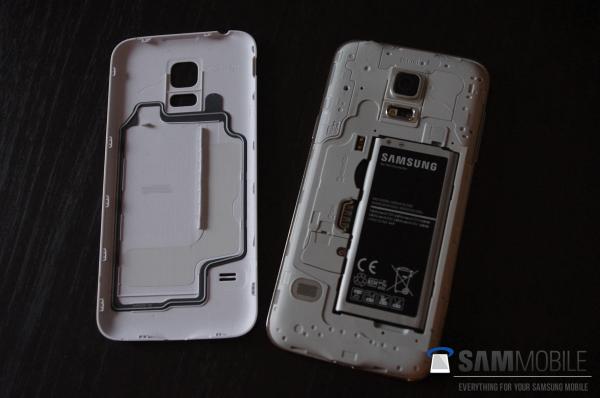 Earlier today we saw the Galaxy S5 Active being made official after weeks of rumours surrounding the device, and now the Samsung Galaxy S5 Mini is the subject of a possible image spot with specs in tow before an official announcement.

We have been hearing a lot about the Galaxy S5 Mini in recent weeks that have included specifications, and the possibility of a dual SIM version being released. Now the image that you can see on this page is one of a few that is allegedly the S5 Mini.

The images and full specifications were sent to the guys over at SamMobile and it seems as if Samsung has kept some of the main features of the handset along with the design. There is the fingerprint scanner and the heart rate scanner, and it looks to have some waterproofing due to the rubber gasket on the rear.

It may not have the same level as the Galaxy S5 though as there is no flap protecting the USB port, other than that the device is tipped to have a 4.5-inch 720p HD Super AMOLED display which fits in with previous rumours.

Under the hood is a yet to be announced Exynos 3470 3 Quad processor running at a clock speed of 1.4GHz, and paired with 1.5GB of RAM running the Android 4.4.2 KitKat operating system. There is 16GB of internal storage expandable via microSD card, 8MP rear camera with 1080p video capture, and a 2.1MP front facer.

It is also claimed to have the latest Samsung Magazine UX interface along with a number of software features that are found on the Galaxy S5.

Do you like the sound of the Samsung Galaxy S5 Mini?