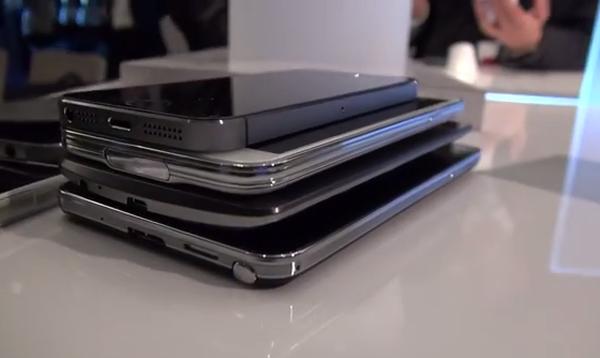 It has been a couple of days now since the official launch of the LG G3 with the handset set to be released by some retailers late next month, and today we have an in depth first impressions video and size comparison.

While the LG G3 hasn’t been officially released yet we are seeing a number of videos appearing providing us an early look at the device against the competition, and already we have seen it compared against the Sony Xperia Z2 and the iPhone 5S.

Today we have a YouTube video that is having an in depth look at the new LG G3 which begins by discussing that despite the fact it is made of plastic the device feels really good in the hand, and the fact it doesn’t suffer from fingerprints is liked.

We get to see the LG G3 alongside the Galaxy Note 3 which we have compared the specs with before, with the Note 3 being just a little bit longer but about the same thickness. We then move onto the Galaxy S5 with the LG G3 coming in between the two Samsung smartphones in terms of size.

What is apparent though is the size of the two displays but this is taken further when the LG G3 is compared against the HTC One M8, which is quite tall despite only having a 5-inch display compared to the 5.5-inch LG G3.

We then get to see the device alongside the iPhone 5S before all the handsets are stacked up on top of each other with the LG G3 being sandwiched in between the two Samsung handsets. The video continues by giving us a look around the G3 but the fact the speaker is on the rear of the device is a little disappointing, although it does sound good.

The display is discussed and demonstrated and also compared to other flagship smartphones before we move onto the operating system. Check out the full video that is almost 24 minutes long and tell us if you have been impressed with the LG G3.