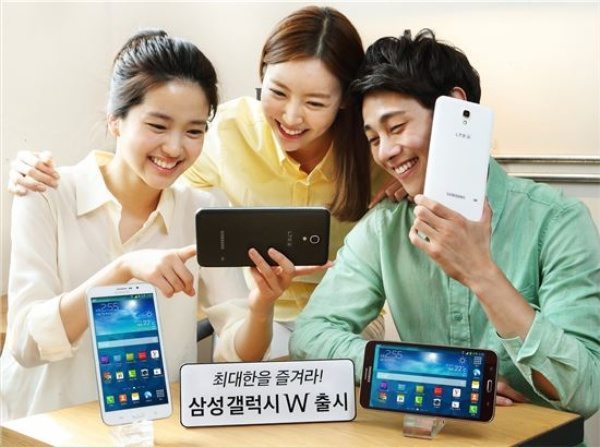 Samsung has coincidentally (or not) chosen to officially announce some new devices on the same day as Apple’s big WWDC keynote. Earlier today we informed readers about the new Tizen phone, the Samsung Z. Now we have details for the Samsung Galaxy W 7-incher that has also been officially launched.

The Galaxy W is a smartphone, despite it’s larger size suggesting it to be more of a tablet. In fact it’s based on the Galaxy Tab but the slimmer bezels should make it slightly easier to hold (for those with big hands)! The phablet has been launched in South Korea where it will have a price tag of 499,400 KRW, around $488, Â£291.

Specs are nothing to write home about but decent enough. The Galaxy W has a 1.2GHz quad-core processor, a 7-inch display with resolution of 1280 x 720, 1.5GB of RAM, and 16GB of internal storage, expandable via microSD. It has an 8-megapixel rear camera, 2-megapixel front-facer, 3200 mAh battery and runs the Android 4.3 Jelly Bean operating system.

Color options for the Galaxy W are black, red or white. You might also be interested in an image leak that we reported on yesterday that is said to be a Samsung Galaxy Mega 7.0, and could be a variant of the Galaxy W for other regions.