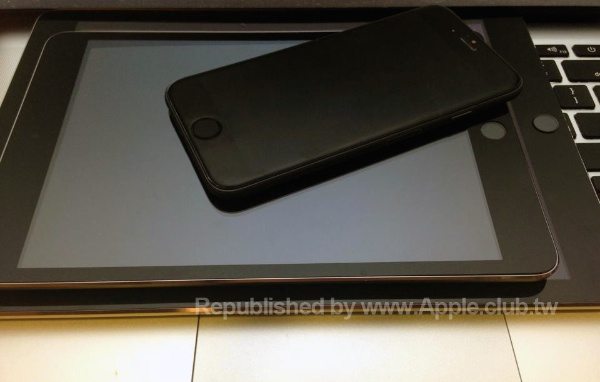 Speculation is stepping up about this year’s iPhone offerings and also the next-generation iPad Air and iPad mini. We’ve seen plenty of leaked images regarding the iPhone 6, some claiming to be the real deal and others said to be dummy units. Now iPad Air 2 and iPad mini 3 models have shown up alongside the iPhone 6.

The image that we’re showing here today comes from an overseas website, which tags the devices as the iPhone 6, iPad 6 (Air 2) and iPad mini 3, although no information is given regarding specs or indeed anything else. We should note that we cannot verify this image, but it’s certainly a point of interest and we have to consider that the models shown could be accurate.

You can see a previous image leak of what is purported to be the iPhone 6 here and yesterday we showed a leaked component said to be for the larger phablet version. Earlier this month there was also a leaked image of an iPad Air 2 dummy model. This previous picture showed the Touch ID fingerprint sensor built into the home button as well as some further design changes such as recessed volume buttons and a repositioned stereo speaker grille with just one row of buttons either side of the Lightning connector rather than two.

The Touch ID feature arrived with the iPhone 5S last year and so we’re not surprised that it looks as though the iPhone 6, iPad Air 2 and iPad mini 3 (aka iPad mini Retina 2) will all step up to Touch ID as well. We’d like to hear your thoughts on this latest image purporting to be of these three devices.

Is Touch ID important for you or are there other improvements that you’d much rather see? Send your comments on the iPhone 6, iPad Air 2 and iPad mini 3 to let us know.