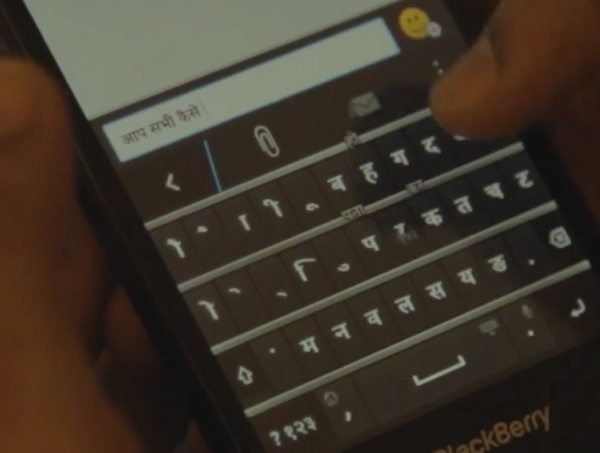 The BlackBerry Z3 smartphone was recently launched for India and was produced by a partnership between BlackBerry and Foxconn. Now BlackBerry has launched an official BlackBerry Z3 video for India that celebrates the phone’s arrival by showing of some of the features, including some that are regional-specific.

You can see full details of BlackBerry Z3 specs in our previous article here. As a reminder though, some key specs include 1.2GHz dual-core processor of the Snapdragon 400 variety, Adreno 305 GPU, a 5-inch display, 1.5GB of RAM, internal storage of 8GB (expandable), a 5-megapixel rear camera, and a 2500 mAh battery.

A couple of days ago we shared a video showing a first look at the phone and now this new video offers a further look. The YouTube video below our story today is an official BlackBerry video for the Z3’s arrival in India. The promo shows many of the features for the Z3 including the BlackBerry Z3 keyboard enabling users to Flick Type in Hinglish and Native Hindi.

It shows the BlackBerry Z3 running the BlackBerry 10.2.1 OS and some many other aspects. Just a few more of those shown are the BlackBerry Browser experience, the signature textured soft touch finish, BlackBerry Hub, BBM, smart sharing, and much more.

Previously we gave the BlackBerry Z3 price as Rs. 15,999 and pre-orders are available now through BlackBerry Stores, the MobileStore or Flipkart with a release expected from July 2nd. We now hear that Flipkart has a deal in place and is selling the Z3 for Rs. 14,999.

When you’ve taken a look at the official BlackBerry Z3 video below we’d like to hear your thoughts. Do you like the features on offer, and does this look like a smartphone that offers everything you need?