Samsung Galaxy Mega 2 release and price for some 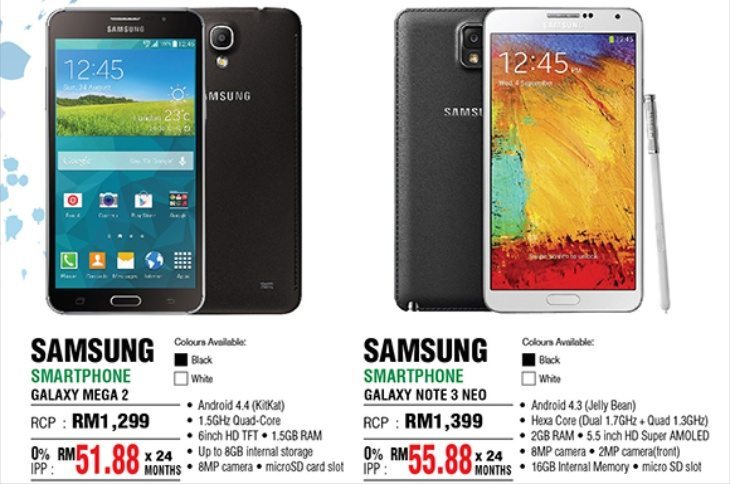 There’s some interesting news today for those of you who have been patiently waiting for Samsung to officially announce the Galaxy Mega 2 phablet. We’ve been hearing rumors about this device for some time, and now the Samsung Galaxy Mega 2 release and price has arrived for some buyers.

In the last few weeks we’ve reported on two different specs leaks (see here and here), which rather interestingly differed from each other. Now it appears that the correct specs for the phone are in fact a mixture of the two leaks we saw, as details are shown on a Galaxy Mega 2 listing for Malaysia.

It’s a bit odd that the phone is now on sale there, considering that Samsung hasn’t officially announced the Galaxy Mega 2 yet and it’s not listed on the official Samsung Malaysia website. Nevertheless, Malaysian retailer SenHeng shows the phone as being available and also reveals a price of RM1,299.

That price is equivalent to around $411, Â£248 or Rs. 24,850, but it’s worth remembering that pricing can vary according to region.Maybank credit card holders are also able to get hold of the phone in Malaysia with 24 interest-free monthly payments of 51.88. For that buyers will also get a car charger and 10,000 mAh battery bank thrown in.

The phone is up for sale in black or white color options. Galaxy Mega 2 specs as per the listing include a 1.5GHz quad-core processor, a 6-inch HD display, 1.5GB of RAM, 8GB of internal storage (expandable via microSD), and an 8-megapixel rear camera. It runs the Android 4.4 KitKat operating system.

Have you been waiting for the Samsung Galaxy Mega 2 to be officially unveiled? Are you hoping that this smartphone will soon release in your region? Let us know with your comments.