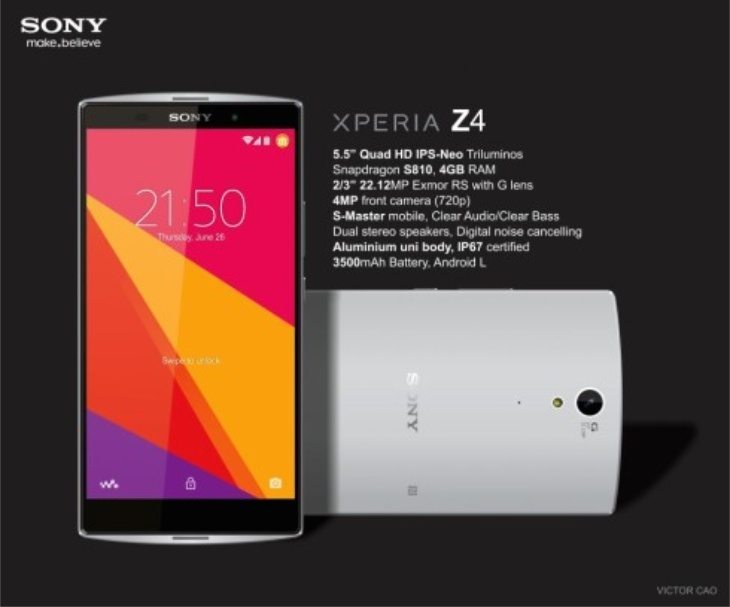 The Sony Xperia Z3 smartphone is expected to be unveiled at an IFA Berlin event next week, but some people are already anticipating the Sony Xperia Z4. Leaks so far on the Z3 suggest that it’s only an incremental upgrade over the Z2, but a new Sony Xperia Z4 design is rather more optimistic.

Recently we shared some new Xperia Z3 leaked photos, and just a few days ago Sony issued an official teaser to whet our appetites for the phone. However, because it’s not thought to offer too much more than the Xperia Z2 there has been a little disappointment from buyers who have been eagerly waiting for the phone.

While it’s always possible that Sony could have a surprise up its sleeve with the Z3, designer Victor Cao has decided to create his vision of the Xperia Z4. His concept of the phone comes with a hopeful specs sheet such as a Snapdragon 810 processor and a 5.5-inch display offering Quad HD resolution of 2560 x 1440 with Triluminos technology and IPS-Neo panel.

As far as the build is concerned this Xperia Z4 idea has an aluminum unibody design and also has dust and water-resistance as you might expect. It looks like a sleek and appealing design to us, but we’d like to know if you agree. Send us your comments about this Sony Xperia Z4 render.