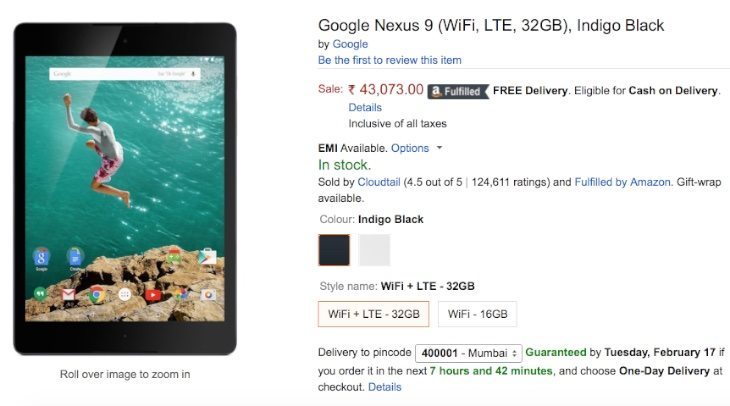 The Google Nexus 9 made by HTC released in November last year and has proved pretty popular since its arrival. The tablet runs pure vanilla Android 5.0 Lollipop, something that has attracted many buyers. If you’re in India you may have struggled to get your hands on the LTE variant. There’s good news today though as we have details of the Google Nexus 9 32GB LTE Amazon India price, and it’s available now.

The Nexus 9 released in a 16GB WiFi version and a 32GB LTE model and the Google Play Store India priced them as Rs. 28,900 and Rs. 44,900 respectively. Google Play still doesn’t have either variant available, but back in December we reported that Amazon India had started selling the 16GB WiFi Indigo Black model for Rs. 28,900. Now the 32GB LTE Nexus 9 is also on sale at Amazon India and it’s priced at Rs. 43,073.

We’ve just checked and the 32GB model is in stock at the time of writing, so if you’ve been waiting for it you might want to place an order pretty quickly. As a refresher on specs we can tell you that the Nexus 9 has a 2.3GHz Nvidia Tegra K1 64-bit dual-core processor, Kepler DX1 graphics, and an 8.9-inch IPS display with resolution of 2048 x 1536 (281 ppi) featuring Gorilla Glass 3.

Further specs include 2GB of RAM, an 8-megapixel rear camera with autofocus, LED flash and 1080p video capture, a 1.6-megapixel front-facing unit, and a non-removable 6700 mAh battery. It also features HTC BoomSound with dual front-facing speakers. If you’re not quite sure whether you want to purchase this tablet you might want to check out our article on Nexus 9 reviews for a closer look.

Will you be heading to Amazon India to pick up the HTC Nexus 9 tablet now that it’s available? We always appreciate receiving your comments.