Earlier in the week, SamMobile broke the news regarding two new smartphones from Samsung with the Samsung Galaxy J7 and Samsung Galaxy J5. They are assumed to belong alongside the Galaxy J1 which was revealed in January. The only thing missing is a Galaxy J3, but for now we’re content to confirm the Galaxy J5 specs.

According to GFXBench, the Samsung Galaxy J5 (SM-J500F) will sport a 5-inch display with a resolution of 1,280 x 720. The processor powering the device is indeed the Snapdragon 410 previously reported, and along with it comes 1.5GB of RAM, and 8GB of internal storage. The cameras are the same as well, so you’ll get 13MP snapper on the back to go along with a 5MP sensor on the front. The smartphone will run Android 5.0.2, and the usual array of sensors are listed with the exception of a barometer, gyroscope, and NFC. 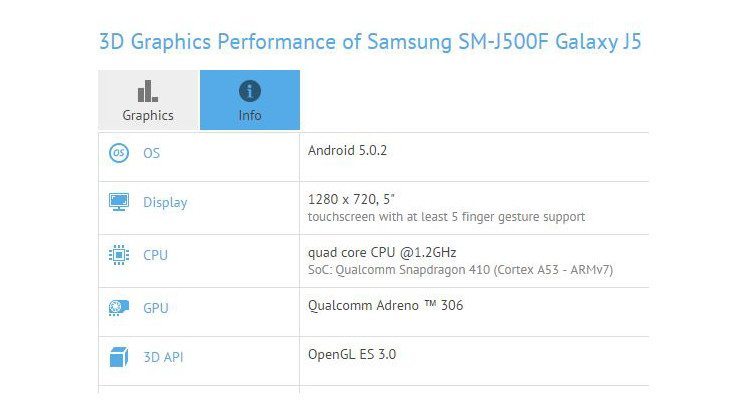 The GFXBenchmark listing for the Samsung Galaxy J5 doesn’t give us any idea of when it will launch, but it does confirm the specs we learned earlier in the week. This means folks can look forward to a plastic and glass Samsung Galaxy J5 sometime in the very near future, and we’ll keep you informed as we learn more about the Galaxy J line.