Galaxy S6 vs iPhone 6 vs One M9 in speed test 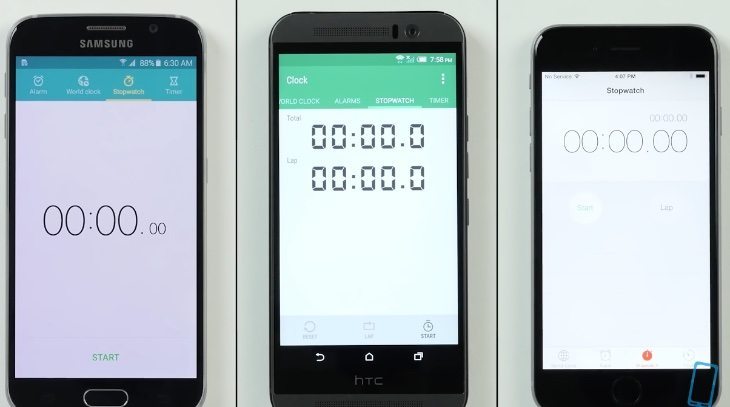 There are some great smartphones on the market to choose from and recent additions include the Samsung Galaxy S6 and HTC One M9 flagship devices. These will both compete with the Apple iPhone 6 that released last year, and although it’s good to check out full comparisons, it can also be interesting to see how different top-flight handsets compare in one specific aspect. That’s why today we’re sharing a Samsung Galaxy S6 vs. iPhone 6 vs. One M9 speed test.

All of these are high-end smartphones with some notable specs, so before we get to the speed test we’ll briefly outline the key specs of each. The Samsung Galaxy S6 is powered by an Exynos 7420 octa-core processor (4 cores at 2.1GHz and 4 at 1.5GHz), with Mali T760MP8 graphics, 3GB of RAM, and a 5.1-inch Super AMOLED display with Quad HD resolution of 2560 x 1440. It runs Android 5.0.2 Lollipop skinned with Samsung’s TouchWiz UI.

Now onto the speed test, and if you scroll down this article you’ll reach a YouTube video from Phone Buff that we’ve embedded for your viewing convenience. It’s of a speed test in race form, with all three handsets shown side-by-side as they are put through their paces with a virtual obstacle test over two laps. All of the phones are on a fresh reboot and all connected to the same WiFi network.

The test then begins with the first lap, with a picture being taken on each phone and then the reviewer opening up a whole series of apps including Gallery, Temple Run 2, Netflix and many more. One phone pretty quickly pulls ahead but we’re not going to ruin your enjoyment of the video by telling you which one! We will say that in this opening lap the phone in second spot comes in 7 seconds after the winner and the slowest of the three comes in another 6 seconds afterwards.

The second lap covers multitasking abilities on the phones, and the Samsung phone has to reload some apps. However, the HTC handset has the apps ready to load in the background, while the iPhone 6 also has most ready to go. This all leads to a very interesting outcome and you’ll hear the reviewer explain this at the conclusion of the testing. You may also be interested in a recent alternative speed test in a different format between the One M9 and iPhone 6, and also a bootup test that included the Galaxy S6 and iPhone 6 at the links provided.

After you’ve watched the speed test below it would be good to know what you think about the performances of the Galaxy S6, iPhone 6, and One M9 in this speed testing? Were you surprised by the overall winner or not?