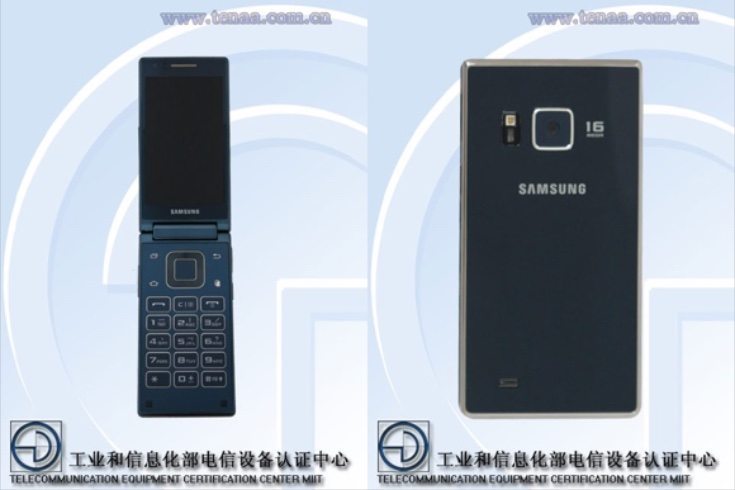 Some details of an upcoming Samsung flip phone have emerged today. New Samsung flip phone SM-G9198 specs have shown up during certification, that reveals some pretty decent specs for the clamshell handset. Although some people consider flip phones to be outdated, there are still likely to be some buyers for the SM-G9198.

This Samsung flip phone turned up during the TENAA certification process in China, and the SM-G9198 will be a successor to the Samsung SM-G9098. The new Samsung smartphone hasn’t been officially announced yet, but we often see devices turn up at TENAA shortly before they are announced so we expect to hear more on this soon. We previously saw this new model number appear in May when it was thought it could be the Samsung Galaxy S6 Mini.

Specs are pretty high-end for a flip phone. The so-far unnamed Samsung SM-G9198 is powered by a 1.8GHz Snapdragon 808 hexa-core processor, with two 3.91-inch AMOLED displays with 1280 x 768 resolution. There’s 2GB of RAM, 16GB of internal storage (expandable to 128GB via microSD), and 4G LTE connectivity.

The camera set-up consists of a 16-megapixel rear camera with LED flash and 5-megapixel front-facing snapper, and the phone will be running the Android 5.1.1 Lollipop operating system on release. It measures 119.7mm x 66.6mm x 16.7mm (closed) and weighs a hefty 191g. This flip phone features a heart rate sensor.

The certification filing also includes some images of the device and we’ve included some here. It’s not known whether this phone will release outside of China, although that seems unlikely. Interestingly we recently reported on a new Samsung Folder phone, although that one has much lesser specs than this latest spot.

Are you still a fan of flip phones? Would you be interested in this new Samsung SM-G9198 if it releases outside of China? Do let us know with your comments.