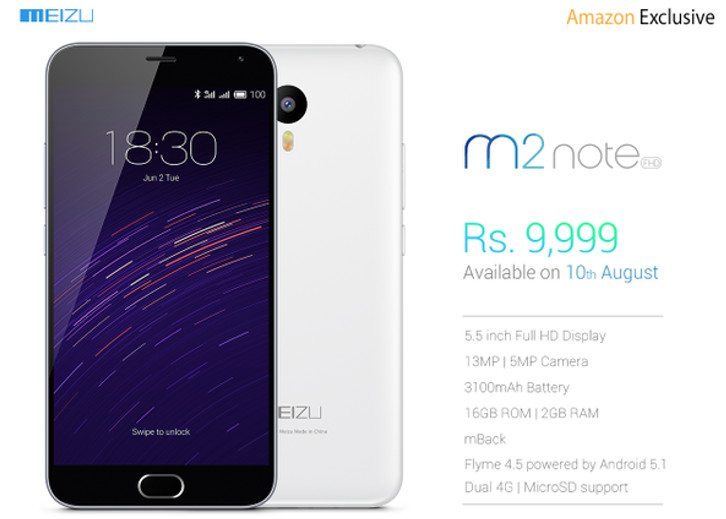 The Meizu M2 Note is a smartphone a lot of customers have been looking forward to and we’re pleased to announce the Meizu M2 Note India release is set for August 10th with a European launch arriving soon after.

We learned of the Meizu M2 Note back in June but weren’t sure of when it would hit India or any other locale. The Meizu M2 Note release date is now set for India along with EU regions, and it’s coming down the pipeline through Amazon. We’ve put M2 Note up against handsets from Xiaomi and Lenovo, and it’s specs show it’s a device to consider if you want a smartphone that won’t break the bank while providing solid specs.

As the name implies, the Meizu M2 Note is a phablet with a 5.5-inch 1,920 x 1,080 IPS display. Beneath the glass beats an octa-core MediaTek MT6753 processor clocked at 1.3GHz and backed by 2GB of DDR3 RAM. The storage capacity is sufficient (for the price) at 16GB and expandable up to 128GB through a microSD card slot.

The Meizu M2 Note is an average-sized phablet measuring 150.9mm x 75.2mm x 8.7mm with a weight of 149grams. Connectivity options include Bluetooth 4.0, GPS, dual band Wi-Fi, 3G HSPA+, 4G LTE, and a hybrid dual-SIM card slot. Rounding things out for the M2 Note is a 13MP rear snapper, 5MP front-facing sensor, 3,100mAh battery, and their Flyme OS which is based on Android 5.1.

If you reside in India, the Meizu M2 Note release will arrive on August 10th for Rs. 9,999 and is an Amazon.in exclusive. Consumers in European countries will pay â‚¬139.99 through Amazon.co.uk and can put one on pre-order today ahead of an August 14th release.

Are you looking forward to the Meizu M2 Note India or EU release?