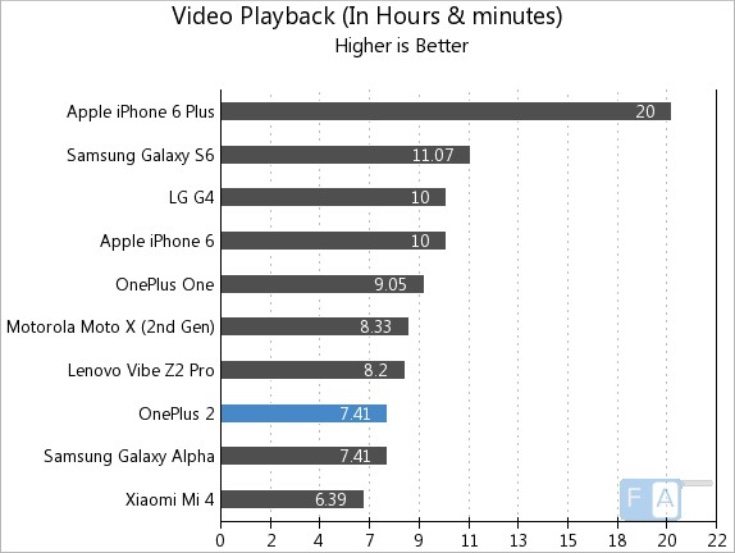 The OnePlus 2 has just released to a waiting world and many people will be considering purchasing this successor to the massively popular OnePlus One. If battery life is a big consideration to you when buying a new smartphone, you might be interested in OnePlus 2 battery life testing vs. Galaxy S6, iPhone 6 and more.

The OnePlus 2 was recently launched and will be made available in regions worldwide, although OnePlus has already acknowledged a shipping delay for US buyers. It packs a 3300 mAh battery that’s non-removable, as is the case these days for many other top smartphones. Therefore, if you are a heavy user of your phone you should take the OnePlus 2 battery life into account before making a purchase.

Today we have details for you of recent extensive OnePlus 2 battery life testing conducted by Fone Arena. Their usual tests looking into battery performance on a new device have been conducted and concentrate on four aspects, Talk Time, 3G Browsing, WiFi Browsing, and Video Playback. This provides a good way of checking out how battery life of the OnePlus 2 stands up against other handsets.

For each category the result of the OnePlus 2 is shown on a table compared with the same test results for 9 other popular smartphones. The other handsets on the charts are the the Samsung Galaxy S6, Apple iPhone 6 and 6 Plus, the original OnePlus One, Xiaomi Mi4, LG G4, Lenovo Vibe Z2 Pro, Moto X 2nd gen, and Samsung Galaxy Alpha.

For the Talk Time category the OnePlus 2 achieves second place with a time of 28 hours and 57 minutes, beaten only by the Lenovo Vibe Z2 Pro on 33 hours and 19 minutes. The Galaxy S6 is further down the table with 16 hours and 40 minutes, while the iPhone 6 is in last position on just 12 hours and 3 minutes. If you’re wondering how the OnePlus 2 has improved on the OnePlus One in battery life we can tell you that the original OnePlus phone managed a time of 20 hours, the same as for the LG G4. 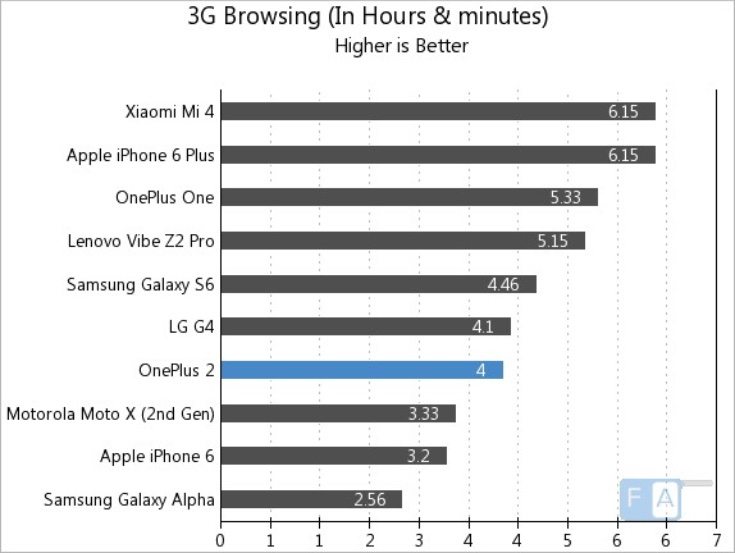 Moving on to 3G Browsing the OnePlus 2 doesn’t fare so well as shown in the image above. It’s in the latter half of the table with a time of 4 hours, and this time the joint top spot is taken by the Xiaomi Mi4 and iPhone 6 Plus on 6 hours and 15 minutes. The Galaxy S6 managed 4 hours and 46 minutes, and in this category the OnePlus 2 was outperformed by the OnePlus One that achieved 5 hours and 33 minutes.

It was a similar story for WiFi Browsing, with the OnePlus 2 again in the bottom half of the table on a time of exactly 5 hours, just below the Galaxy S6 with 5 hours and 53 minutes. Once more the OnePlus One managed a better result, this time on 6 hours and 15 minutes. There was a tie for the top position again, with the iPhone 6 Plus and Xiaomi Mi4 both achieving 9 hours and 5 minutes.

The final category was for Video Playback, with the OnePlus 2 not faring so well again as shown in the image below. It attained a time of 7 hours and 41 minutes and was once again outstripped by the OnePlus One on 9 hours and 5 minutes. The Galaxy S6 was in second place on 11 hours and 7 minutes while the winner was the iPhone 6 Plus with a notable time of 20 hours. This time the Xiaomi Mi4 came last with 6 hours and 39 minutes.

It’s evident that after a promising start for Talk Time, the OnePlus 2 could not manage such impressive results for the remaining categories. You can see the other table images and also Fone Arena’s One Charge Rating for the OnePlus 2 at the source below, where you’ll also see a link for the battery life test procedures followed.

Are you surprised that the OnePlus 2 battery life did not achieve better results in this testing? Will this make you think twice about purchasing the new OnePlus smartphone or not? Let us have your comments.