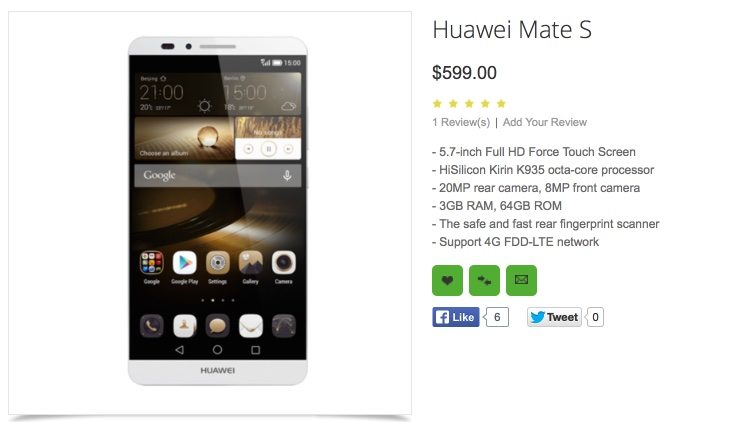 IFA 2015 in Berlin is quickly rolling around and one of the devices expected to be officially introduced at the event next month is the Huawei Mate S. Some details of the phone have been leaked from a retail listing, and the Huawei Mate S is rumored to include a tipped iPhone 6S feature, namely Force Touch technology.

We’ve been hearing about Force Touch for some time, mainly in connection with Apple’s upcoming iPhone 6S and iPhone 6S Plus. It’s a kind of technology that enables the difference between light and stronger touches to be detected and then provide different functions accordingly. As well as the new iPhones for 2015, Force Touch is also rumored for the upcoming iPad Pro.

The OppoMart reveal lists the Huawei Mate S as having a 5.7-inch Full HD (1920 x 1080) Force Touch screen, as well as some further appealing specs. These include a HiSilicon Kirin K935 octa-core processor, Mali-T628 graphics, 3GB of RAM, and 64GB of internal storage (expandable via microSD). Also shown are a 20-megapixel rear camera, 8-megapixel front-facing camera, and a very nicely sizeable 4100 mAh battery.

The Huawei Mate S will be running the Android 5.1 Lollipop operating system skinned with the Emotion 3.1 UI. Other revelations from the listing are a rear fingerprint sensor and 4G FDD-LTE network support. Dimensions are given as 157mm x 81mm x 7.9mm, it weighs 185g, and comes in black or white color choices.

Finally a price tag of $599 is also shown, although pricing on listings very often change when a phone is made official, so that’s worth bearing in mind. Are you pleased to hear about the inclusion of Force Touch technology for the Huawei Mate S? Let us know with your comments.