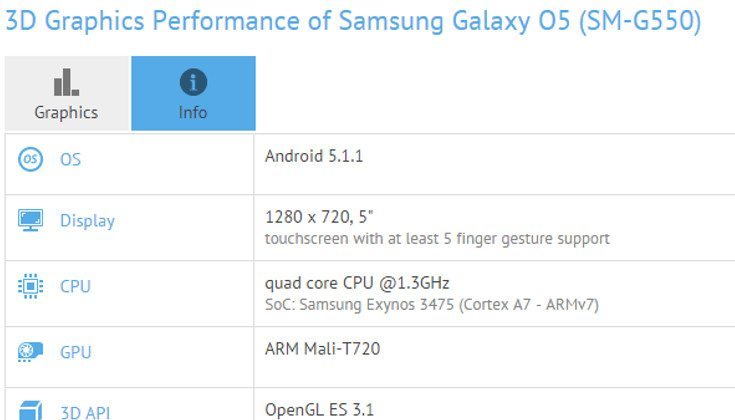 According to the GFXBench listing, the Samsung Galaxy O5 will feature a 5-inch panel with a resolution of 1,280 x 720. The processor powering the handset is listed as a 1.3GHz Exynos 3475 which is backed by 1GB of RAM. As for the storage, you’ll only get 8GB but assume a microSD slot is present. Rounding things out for the Galaxy O5 specs is an 8MP rear camera, 5MP front-facing camera, Bluetooth, GPS, Wi-Fi and Android 5.1.1.

The Samsung Galaxy O5 specs line up perfectly with the previous leak, so you can also expect a 2,600mAh battery on the mid-range device. We’re still not sure when the Samsung Galaxy O5 release date will arrive, but it will likely come with a name change (Grand On) and a reasonable price tag wherever it lands.