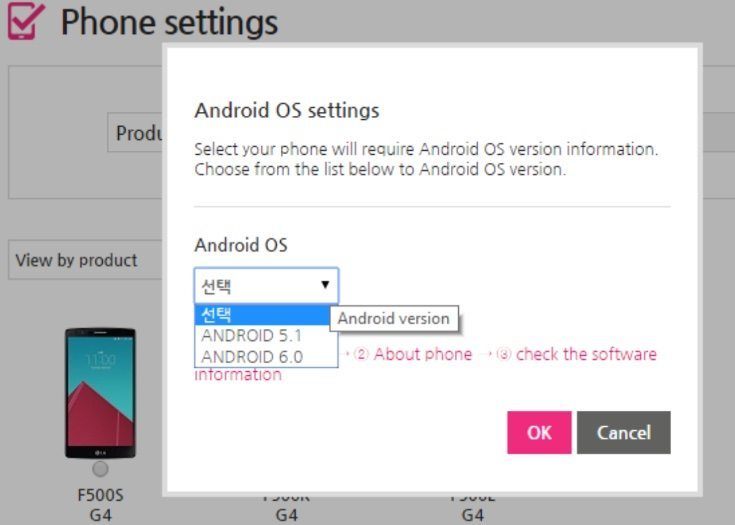 Since Google unleashed details of the Android 6.0 Marshmallow release at this week’s event, the most popular questions that we’re being asked regard which devices it’s coming to and when. Hot on the heels of news of HTC and Motorola devices that will be receiving the Marshmallow update, we now have news on the LG G3 and LG G4 models indicated for the Android 6.0 update.

Manufacturers seem to be getting better at providing update information to customers, although this news on the LG G3 and LG G4 hasn’t come directly from LG. We imagine that the company might issue some official news on the update soon though, considering some information from the official LG Korea support site.

The support site has just been updated and Android 6.0 is now listed as an operating system option along with previous versions for both the LG G3 and LG G4. The models listed are the LG G3 F400S, the LG G3 F400K, and LG G3 F400L, as well as the LG G4 F500S, the LG G4 F500K, and finally the LG G4 F500L. At this point the corresponding pages offering support are not available, but this is certainly a promising sign that the update for these devices is not too far away.

If accurate it looks as though the LG G3 and LG G4 will skip the Android 5.1.1 Lollipop update and move straight to Android Marshmallow. Although not listed yet the Android 6.0 Marshmallow update is likely to also become available for further LG devices such as the LG G Flex 2 as well as other variants of the G3 and G4.

We’ll bring more on the Android 6.0 Marshmallow update for the LG G3, LG G4, and other LG devices as we hear it, so do check back with us from time to time. Are you impatient to receive this upgrade for your LG smartphone?