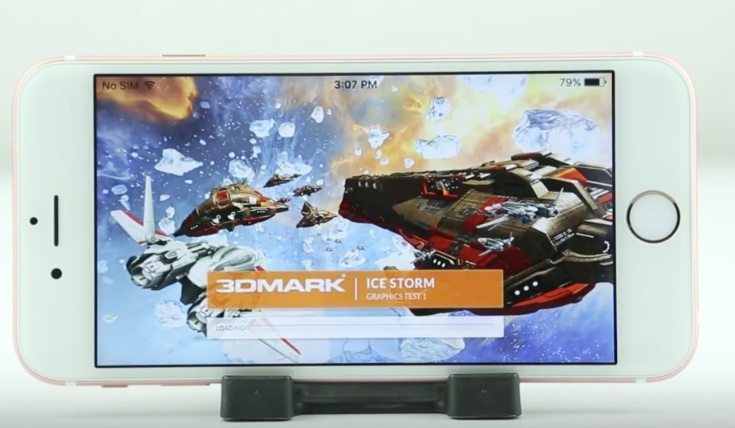 Many people have recently been getting their hands on the new Apple iPhone 6S and some are still considering whether to buy this smartphone. One indicator of how well a phone performs is how it fares in benchmark testing, and it can be interesting to see how new high-end devices score in this type of testing. Today we’re looking at iPhone 6S benchmarks and the results compared with some other devices.

You can see full specs of the iPhone 6S as well as prices in our launch article on the phone. As a brief refresher on the key specs of the device it has a 1.84GHz Apple A9 dual-core processor, PowerVR GT7600 graphics, and 2GB of RAM. It released running iOS 9 and has a 4.7-inch display with resolution of 1334 x 750.

We’ve already shown a comparison of the iPhone 6S, 6S Plus and Samsung Galaxy S6 in one benchmark test, but the new video that we’ve positioned below shows several benchmark tests being performed on the iPhone 6S. The tests shown are AnTuTu 5, Geekbench 3.0, GFX Bench, 3D Mark Ice Storm Unlimited, and Basemark OS II.

After each test the scores attained by the iPhone 6S are shown and a table is then displayed so that you can compare the results with some other handsets (devices vary by test). Just a few of the other phones that the results are compared with are the iPhone 6, iPhone 6 Plus, Samsung Galaxy Note 5 and Galaxy S6, OnePlus 2, and LG G4. The benchmark scores achieved by the iPhone 6S are impressive, with the phone top of the table for the majority of the tests.

You can take a look at every benchmark test, the results, and how the phone compares with other handsets when you view the video below. When you’ve taken a look we’d welcome your comments. Are you satisfied with the benchmark results of the iPhone 6S as shown in this testing?